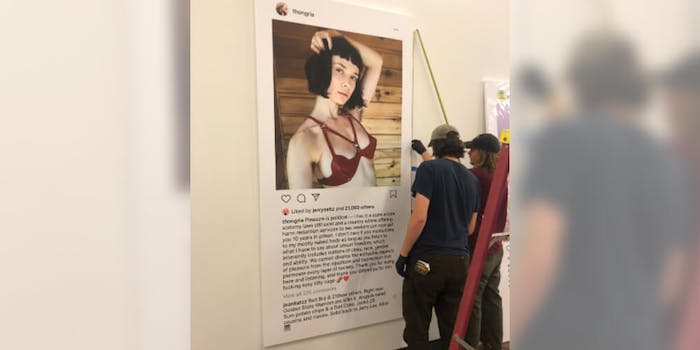 'I didn’t consent to my face hanging in this art gallery.'

A woman says artist Richard Prince used her “sexy selfie” in his museum exhibition without her consent.

Zöe Ligon, a sex educator and sex toy store owner, said she was surprised to find a screenshot of her Instagram post being used by Prince in his “New Portraits” show at the Museum of Contemporary Art Detroit last month.

“I didn’t consent to my face hanging in this art gallery,” Ligon tweeted on Friday.

Imagine my surprise when I saw Richard Prince tweet a 6ft inkjet printed picture of a screenshot of an Instagram post of mine hanging up in my hometown of Detroit at MOCAD. I didn’t consent to my face hanging in this art gallery.

In her post, Ligon pointed out that the artist hadn’t done anything illegal but said his use of her post was “reckless,” “embarrassing,” and “uninformed.”

“I am a survivor of childhood sexual abuse,” she explained. “Part of the reason I take ‘sexy selfies’ is because I am reclaiming my own sexualized image. To see my image on the walls of MOCAD feels as though a picture I’ve taken of myself to reclaim my sexual body is being used to violate me all over again.”

Ligon instructed both the museum and the artist to donate to the Sex Worker Outreach Project since her original post was “about criminalization of sex work and harm reduction.”

I’d like for both MOCAD and R. Prince to donate to Sex Worker Outreach Project (SWOP) since this is a post about criminalization of sex work and harm reduction

In a statement to Artnews, MOCAD defended the work.

“The point of the exhibition is to speak about these issues of ownership and ask these questions,” the statement said. “This is a very relevant discussion. Is social media empowering people or co-opting artistic production? Where do our expectations and perceptions around privacy and consent lead us when using social media? What are you to consenting to when posting? Is all photography exploitive?”

In the statement, Prince said he met with Ligon before the show opened.

“We asked if she wanted us to remove the work from the exhibition and at the time, she said that she did not want it taken down unless we removed all the works in the exhibition,” Prince said. “MOCAD has no plans to censor the entire exhibition.”

Ligon said her intention with the call-out tweets was to raise awareness.

“Also, this happened a month ago. I’m fine,” she said. “Wasn’t going to bring it up because he doesn’t deserve his name in our mouths, but I educate around consent so I just wanted to share it from a consent and media literacy standpoint.”

Also, this happened a month ago. I’m fine. Wasn’t going to bring it up because he doesn’t deserve his name in our mouths, but I educate around consent so I just wanted to share it from a consent and media literacy standpoint.

Prince’s exhibit “New Portraits” was first shown in New York in 2014, and several women voiced concerns over the use of their pictures without permission. The exhibition prompted multiple lawsuits.