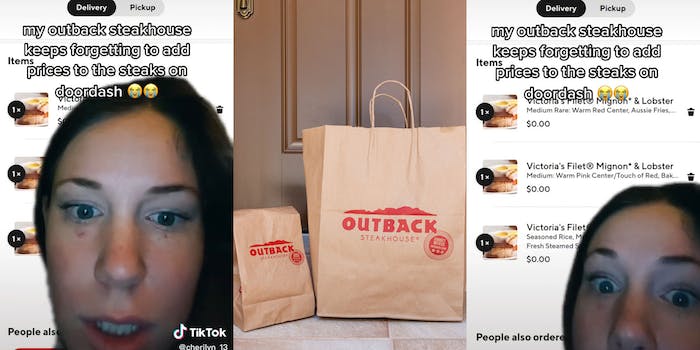 ‘Did u fr get it free?’ A TikToker exploited a DoorDash error and got free steaks delivered

'I was vegan but due to the circumstances...'

TikToker @cherilyn_13 posted a clip to the platform that may have ruined a good thing she had going.

She noticed that on DoorDash her local Outback Steakhouse location had no prices listed for several steak dishes. So, she did what anyone else would do: see if they could actually order a steak for free and get it delivered.

And it actually worked.

She writes in a caption for the video, “I was vegan but due to the circumstances i’m no longer #doordash #carnivore #scammer.”

In a text overlay on the now-viral TikTok Cher remarked, “My outback steakhouse keeps forgetting to add prices to the steaks on doordash.”

Other users on the platform were shocked that it actually worked, with some speculating that there would be dire repercussions for the employee responsible for setting up the DoorDash pricing system.

“Whoever’s responsible for the outback door dash def getting fired.”

Another user in the comments section appears to be a DoorDash driver who reaped the benefits of the “hack.”

“is this why i be doing door dashes that have like 10 steak dinners but they tip me fire.”

Judging by other comments, it doesn’t seem like this is a hack specific to Outback Steakhouse.

“I THOUGHT I WAS THE ONLY ONEEE!!! Did it at dennys on postmates and istg i got HUNDREDS of dollars worth of chocolate chip cookie pancakes.”

Others double-checked with Cher to see if this legitimately worked as they noticed several other restaurants in their own areas had this same pricing error.

“did u fr get it free? bc a couple [restaurants] near me look like this too.”

Cher said that she was only able to get the steaks ordered for free the first time she completed the order as the location would cancel her order whenever she would try to get more free food.

“They blacklisted me or just have someone constantly watching the orders cus mine started getting cancelled by outback.”

The DoorDash application isn’t the only place where this type of online pricing error has cost businesses tons of potential earnings.

Digital Commerce 360 writes: “Zappos, Amazon and Uber are among the major companies that have fallen victim to online pricing blunders, and McDonald’s had a similar experience with a self-service ordering system.”

For example, in 2010, Amazon had a pricing error on Marvel graphic novels that marked down comic books that were originally priced as high as $125 down to just $15.

The retail mega-giant was able to isolate the issue and cancel a ton of orders that were placed at the erroneous “discounted” price, which sparked backlash. To pacify customers, Amazon issued $25 gift cards in lieu of sending the comic books.

In many instances of online shopping, algorithmic pricing can be to blame, like the time Amazon listed a book on flies for $23.7 million, or when a Toronto Uber customer was charged over $14,000 for a single 3.5 mile Uber ride.

Restaurants that deliver through DoorDash don’t use algorithmic pricing to determine the cost of their items, although tech glitches can sometimes lead to free food scams for customers.

It seems that in Cher’s case, the restaurant became wise to her “scam” of their pricing structure.

The Daily Dot has reached out to Cher via TikTok for further comment.