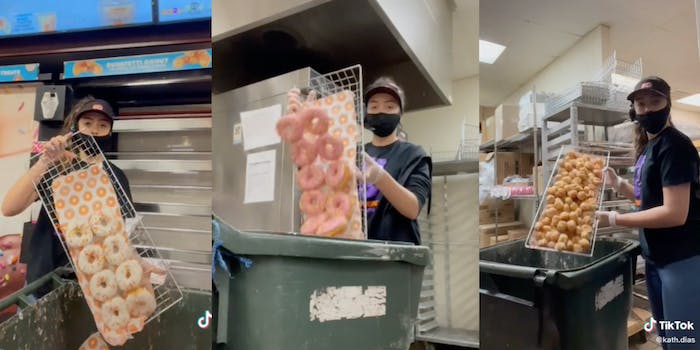 Worker exposes all the donuts Dunkin’ throws away at the end of day in viral TikTok, sparking food waste debate

'Big food corporations suck on so many levels.'

Footage of a Dunkin’ employee tossing donuts at the end of the shift has sparked a discussion about food waste on Reddit.

The video shared by @kath.dias is similar to another, which was posted by TikTok user @bryanjohnston_ in January. The videos both show Dunkin’ employees disposing of a full trashcan’s worth of donuts at the end of the workday, per company policy.

The Daily Dot reported at the time that the video sparked debate about food waste, and a new video with similar content, recently posted to the “Mildly Infuriating” subreddit, has drawn familiar reactions.

In addition to criticizing the chain’s practices, users shared their own experiences of being required to throw away food at their jobs.

“I worked at a local sandwich chain as a teenager,” u/kennytucson wrote. “All the rejected sandwiches (too much mayo, wrong cheese, etc) were kept and delivered to a commissary the next day to be distributed to homeless people. Leftover, scrapped, and stale bread was sent back to be made into the meatballs.”

“Always seemed like a great idea. Food waste is obscene. I later worked in an office supply chain and same deal. It’s crazy what gets thrown away just because it’s returned or opened.”

Another poster who worked at Starbucks said similar practices were in place during their tenure there.

“I worked at Starbucks and the same thing happened,” u/McRibeater wrote. “We used to throw away a shit ton at Starbucks, we’re talking about sandwiches, lunchboxes, breakfast sandwiches, pastries, etc. Like a garbage bag or even two full some nights. I knew someone who got fired because the Store Manager was encouraging taking food home as most Baristas were broke students, but the District Manager found out and terminated them. Big food corporations suck on so many levels.”

According to the Natural Resources Defense Council, up to 40% of food in the U.S. is never eaten—and that percentage only goes up for restaurants and chain eateries.

As one in eight people struggle to put food on the table, according to the NRDC’s 2017 update to its original 2021 report “Wasted,” restaurants make up 18% of all food waste. The combination of restaurants and institutional food service providers generate two to four times the waste of grocery stores, retail supercenters, and wholesale distributors combined, the report states.

As food waste becomes a bigger concern to consumers, apps like Too Good To Go are working to get food that would otherwise be thrown away into the hands of those who go without.