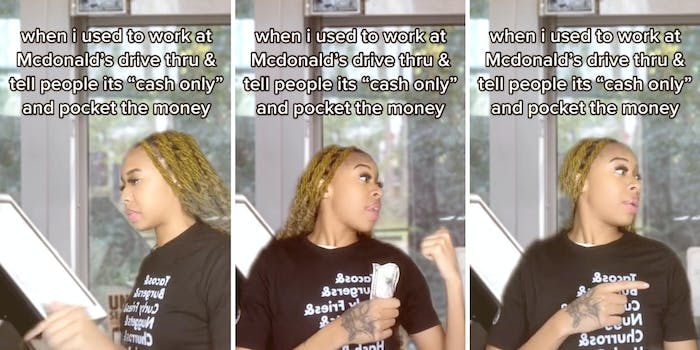 ‘Don’t care if y’all do this, as long as I get what I ordered’: Former McDonald’s worker says she told customers it was cash-only, then pocketed the money

'If people would pay minimum wage workers a living wage they wouldn’t have to do this.'

In a viral TikTok video, a former McDonald’s employee said she told drive-thru customers they could only pay in cash and would pocket the money.

“That 7.25 back then wasn’t cutting it,” user @taypancakess captioned the TikTok.

The video shows the TikToker re-enacting her actions to a viral audio by user @lottoraks. “Follow me to the back real quick,” the user says, acting as management.

“When I used to work at McDonald’s drive-thru and tell people it’s ‘cash only’ and pocket the money,” the former employee wrote via text on the TikTok.

The user’s video received over 2.9 million views and sparked debate among other users in the comments.

Some users said they didn’t care where their money went as long as they got their food.

“Honestly [I’d] rather my money go to a minimum wage worker than a million dollar [corporation],” one user said.

“We customers dgaf, just get our orders right,” another wrote.

“I personally don’t care if y’all do this, as long as I get what I ordered tbh … you get your money & I get my food,” a third said.

However, others debated the ethics of the former employee’s actions.

“Y’all should be ashamed … why all y’all relate to this,” one user said.

“Omg poor mcdonald’s having change stolen from their billion dollar enterprise … how will they ever financially recover,” another sarcastically said.

“Oh so being a [thief] IS okay thanks for clarifying,” a third user shot back.

Some TikTok users discussed whether or not the employee would be taking money from the McDonald’s corporation or the franchise owner.

“It doesn’t go the 200 billion dollar company though, it goes to the guy down the block who invested all his money into starting a franchise,” one user said.

“You need a minimum of a million in equity to open a McDonald’s franchise.. I’m sure the ‘guy down the street’ is doing just fine,” another user said in response.

“Not all McDonald’s are franchise owned..,” a third user chimed in.

Other former fast-food employees admitted to doing the same thing.

“Facts. I befriended this older lady. I would take the cash window [and] she worked the food. we split the earning at the end of our shift lmao,” one user said.

“I got fired cause of this,” another said.

“Mann I would do that at Subway talking bout ‘I made $40 off tips’ every night ain’t ever get caught cause manager was never present teens ran [that shit],” a third said.

Some users even showed their outright support for the former employee.

“Imma start paying with cash. I got y’all [for real],” one user said.

“If people would pay minimum wage workers a living wage they wouldn’t have to do this,” another said.

The Daily Dot reached out to @taypancakess via Instagram direct message and McDonald’s via email.