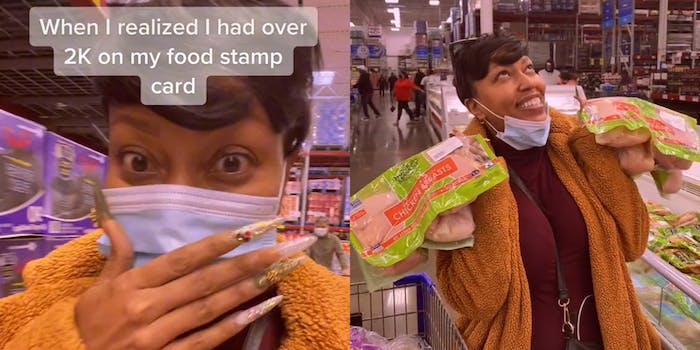 ‘When I realized I had over 2K on my food stamp card’: Viral TikTok shows food stamp shopping spree at supermarket, sparking debate

'They soon to be tussling in the comments.'

@cam_kamera filmed and posted a hilarious video of herself posing with food, including a rack of lamb and chicken breasts. The caption reads, “Thank you, Lord.” She wrote in the overlay text, “When I realized I had over 2K on my food stamp card.”

It is a joyous and comedic video, but as one of the top comments stated, “Enjoy! They soon to be tussling in the comments.”

Another commenter wrote about the attitude of many watching the food stamps video: “Without reading the comments, I already know it’s some maddddddddd folks who refuse to use the resources they have access to as well.”

One woman commented, “Crying in middle class.” Replying to the comment, another wrote, “Real tears because this single-parent teacher hasn’t been to a nail salon since 2006 and never received ANY type of assistance.” @cam_kamera replied, in regards the food stamps, “I’m a nail tech, so I do my own nails. Business was slow for me during and after the pandemic. I needed this.”

@cam_kamera also commented, “I’m so glad I didn’t throw the [food stamp card] away y’all.” One woman said she had a similar experience, “Girl, I checked my card one day and had $1,800 in there.”

The follow-up video explained that she’d recently moved to Houston from Washington state and had applied for benefits. But she didn’t hear back and essentially assumed she was declined for food stamps, until she decided to check online to be sure. She reminded people to check their card if they applied for food stamps.

“Check that number. If I tell you I won the lottery, you would think I did,” @cam_kamera said about her newfound food stamp card funds.

Texans who qualify can apply for SNAP benefits online.