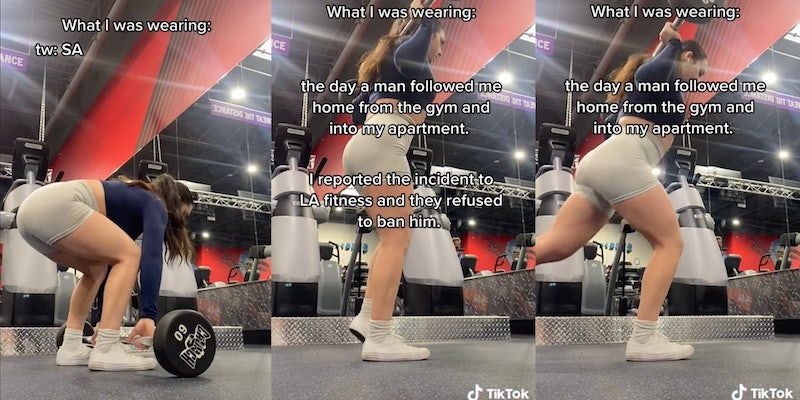 'And men think we’re dramatic for wanting women only gyms.'

In a viral video, a fitness TikToker said she was followed home from the gym and assaulted—and that her LA Fitness initially refused to do anything about it.

Jessi Balter (@jessibalter) posted the TikTok with a trigger warning for sexual assault. In the 25-second clip, Balter shows a video of herself working out on the day of the assault and accompanies with a text overlay to explain the situation.

Balter said after she left the gym a man who attends the same LA Fitness location as her followed her home from the gym and into her apartment.

She reported the incident to her gym, but they “refused to ban him,” she said.

“How can they care more about a contract than their own member’s safety???” she said in the video.

The video has more than 6.8 million views on the app and a few thousand comments.

“Check your priorities, @la.fitness & get these disgusting men out of your gym,” Balter said in the caption.

Balter told the Daily Dot that she didn’t post the video to “cancel” LA Fitness.

“I posted the video to create a safe space for women to see that they are not alone. Unfortunately, things like this happen all the time at gyms and [in] other places and it goes unreported. I hope my video has allowed other women to share their experiences, or even think about sharing,” Balter said.

People in the comments section were horrified by the situation and the gym’s reaction.

“And men think we’re dramatic for wanting women only gyms,” a commenter wrote.

“It’s scary that that isn’t enough for him to get banned i’m so sorry,” another said.

“Okie so he used their gym at a hunting ground which could potentially cause harm to other members but they want the monthly fee?” a person said.

Balter ended up canceling her membership, but the price of going to a new gym fell on her. She explained that because she ended the contract she “cost $150 and had to pay for a new gym membership which did suck.”

In a follow-up video Balter said the district manager of operations of south Florida called her and she re-recounted what happened. He agreed the situation was mishandled and offered her a refund. The manager also asked what else he could do to rectify the situation. Balter asked that he read through the comments from the video so he can become more aware of and address the harassment that people face in gyms.

“Read what people are saying and make something different,” she told him.

He also told her that LA Fitness fully supports her in the case that she wants to reach out to law enforcement and they would be “fully cooperative.”

While Balter did provide LA Fitness with the man’s first name and gym location she felt uncomfortable giving too many details since he knows where she lives.

The district manager also said employees will have to take a training on how to properly handle complaints of inappropriate behavior from other gymgoers so there are repercussions other than just writing a note on the person’s account.

Balter ended saying that if people feel comfortable at their local LA Fitness they should continue to go there because this isn’t an issue exclusive to the gym brand, it “can happen anywhere.”

The Daily Dot reached out to LA Fitness via email.

Update 6:16pm CT, Dec. 21: A spokesperson for LA Fitness denies that the company did not ban the alleged assailant, telling the Daily Dot in an email:

We never refused to ban this man. We do not have any idea who he is or we would ban him! She has not provided this information.  If you look at her recent post on this topic, you will notice that she more completely explains what she has told us, which has never included a name or any identity of her attacker at all. She is not comfortable doing that, she says.  She has not requested a “ban” because she knows that she is the only one who has the information on who her attacker is.