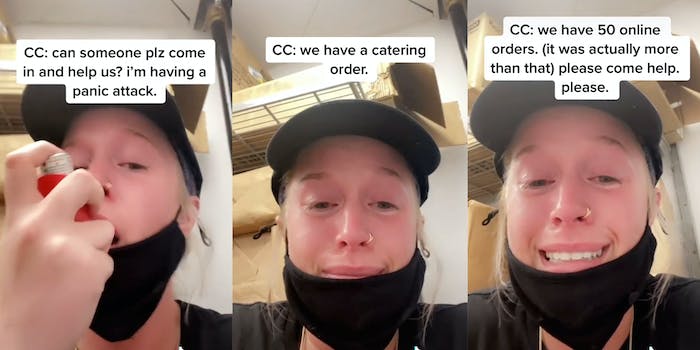 In a viral TikTok, a Louisville fast-food service worker in the midst of a panic attack sobs about being “understaffed” and “overwhelmed.”

@ceramictay posted a tearful video from her workplace, asking, “Can someone please come in and help us? I’m having a panic attack.” The caption reads, “When you’re #understaffed and #overwhelmed, and the customers won’t stop yelling at you.”

She wrote in the comments that she sent the video to her “work group chat btw and no one responded.”

She takes in a puff of her inhaler and says, “We have a catering order. We have 50 online orders. Please come help, please.”

She did provide a disclaimer: “As stressful as this day was, I’m trying to save money for school next semester so if you recognize the uniform, plz refrain from commenting where. It is because I’m really not trying to get fired.”

Her TikTok panic attack instantly became an example of the treatment of food industry employees. One comment, saying, ” Literally all of us in the restaurant industry rn,” crystallized the majority of the well-wishes and words of solidarity.

“Please remember how much stress restaurant workers are under before you scream at them for not getting your food out in 30 seconds,” commented @kkaileyreads.

In a subsequent video, she says she’s been accepted into a university in Europe and needs to work and earn money to have her dog shipped with her.

She later answered comments from people telling her to “do her job and quit using her phone.” She admitted that she didn’t make the video on the clock and that she posted the “panic attack” to TikTok “as like a joke.”

“So do with that information as you will,” she says, while also noting her frustration was over the workload and not her co-workers.

The TikToker did not immediately respond to the Daily Dot’s request for comment.