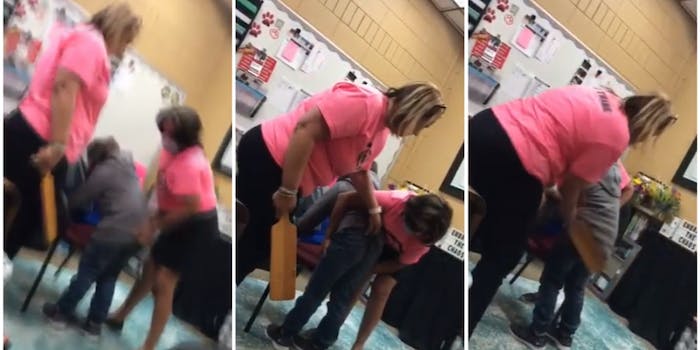 ‘I’ve never hit my daughter like she hit her’: Florida principal caught on video paddling 6-year-old in front of child’s mother

The girl can be heard wailing in the video, which has gone viral.

A Florida principal was captured on video paddling a 6-year-old in front of the child’s mother, and could be facing criminal charges as a result.

The incident happened April 13 at Central High School in Clewiston, Florida. According to a report from WINK-TV, the 6-year-old student caused damage to a computer, and her mother was summoned to the school to pay a $50 fine.

When the mother arrived there, she was taken to Principal Melissa Carter’s office, where her daughter was. As video taken by the mother shows, Carter hits the girl with a paddle on the buttocks while Cecilia Self, a clerk at the school, holds the girl against a desk.

The girl can be heard wailing in the video in reaction to the punishment.

“The hatred with which she hit my daughter, I mean it was a hatred that, really I’ve never hit my daughter like she hit her,” the mother told WINK News in an interview conducted in Spanish. She added, “I had never hit her,” crying as she conveyed that.

WINK learned from investigators that “the woman mentioned paddling with her and a deputy present, but she said she didn’t understand the process correctly due to a language barrier.”

A follow-up story from WINK revealed that she was reluctant to raise the issue because of her legal status. Though Self served as an interpreter, the mother contends that she did not correctly convey what was happening.

The mother did record the video, however, to expose the school’s disciplinary methods.

“Nobody would have believed me,” the mother told WINK, explaining why she recorded the video. “I sacrificed my daughter, so all parents can realize what’s happening in this school.”

The video has circulated via social media channels as well on the WINK website. The Fifty Shades of Whey Twitter shared a TikToker’s video of the event, which starts with video WINK shared and adds narration.

Reporting from WINK revealed that the incident is under investigation by the Clewiston Police Department, and that the State Attorney’s Office for the 20th Judicial Circuit is considering whether to press charges

“That’s aggravated battery,” said Bret Provinsky, an attorney who works with undocumented immigrants and is working with the girl’s family. “They’re using a weapon that can cause severe physical harm.”

While corporal punishment is allowed in some Florida school districts, it’s expressly off the list of disciplinary options for Hendry County School District administrators. The district, however, has not commented on the case despite WINK’s repeated requests for comment.

The Daily Dot has reached out to the Hendry County School District and Clewiston Police Department for comment.