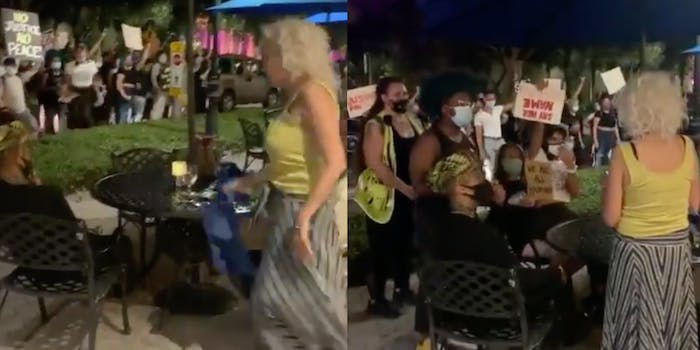 The couple seemingly taunted the protesters with offensive hand gestures.

The man, Ken, says the hand gestures were because they did not want to be photographed; protesters, however, say the motions appeared directed toward them.

In Florida and other states, protests broke out after a grand jury verdict found police officers not guilty of killing Breonna Taylor, a 26-year-old Black woman.

In a now-viral video of the incident, a protester approaches the couple’s table. As he sits down, the woman asks him to leave and tries to pull his chair. “This is my table!” she says.

Soon after, more protesters join the table with several shouting at the couple to “stand up and fight.” Ken then gets up and protects his friend, who calls the cops.

During the altercation, protesters yelled several profanities at the couple. “I ought to knock your old-ass boyfriend the fuck out,” one says.

A reporter recording the incident notes that several diners came to the couple’s defense.

After videos of the altercation went viral, a Twitter user shared an image of the couple showing what led to the incident. “This is why they were targeted,” he wrote, showing an image of Ken giving the middle finger while the woman gives a thumbs down. “Everything happens for a reason.”

A Republican congressional candidate in Florida who spoke to Ken said the gestures were aimed at the protesters’ chants and insults.

According to the International Business Times, Ken has filed a formal complaint with the mayor.