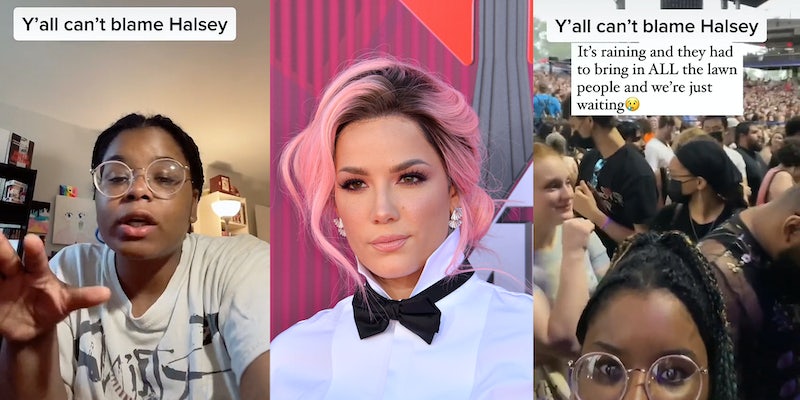 'Merriweather Pavilion almost killed me and hundreds of other Halsey fans and yet Halsey is getting blamed.'

A TikToker named Kaida posted a viral video about her experience at the quagmire that was Halsey’s canceled Maryland concert. In the video, the user @thelittlestdragonk urges folks to not blame Halsey for the way it was handled and claims the Columbia venue, Merriweather Post Pavilion, was at fault.

Her video, shared one day after the disastrous June 8 event, has received over 834,000 views.

“Merriweather Pavilion almost killed me and hundreds of other Halsey fans and yet Halsey is getting blamed,” Kaida says. “[…] When I tell you this was the most unprofessional venue and unorganized venue I’ve ever been to in my whole entire fucking life.”

Long before the disastrous weather interruption, the creator argues that the venue’s system for guests to line up to enter the venue was “strict” but disorganized. Kaida alleges the venue wouldn’t permit people to line up until 5pm, but when she arrived at 11am, a line had already formed. “To make it even worse they were not ready for the amount of people that were gonna fucking show up,” she continues.

Kaida then cuts to footage of lines of fans who were waiting to attend the concert and went on to say that the venue took people from the back and then put them at a separate entry point.

Ultimately, when it came time to let people into the venue, the TikToker claims Merriweather staff opened the doors and let people come in to “just figure it out” themselves.

She says that the venue had trouble even getting concertgoers into an organized line. By the time the pit had filled up with guests and the first act took the stage, rain started pouring down. Since the Merriweather Post Pavilion is, as the TikToker says, “an inside/outside venue” with partial lawn seating, there were people “just getting fucking rained on.”

Kaida then alleges that the venue had received a tornado warning before attendees were aware of such a warning but let the show go on regardless. “This is when they should’ve canceled the fucking concert,” she says.

The creator also claims that venue staff were disrespectful to guests during the incident and did little to help, despite the water’s proximity to electrical equipment.

Kaida shows a clip of the venue showing a deluge of precipitation cascading onto attendees. She claims that the laugh in the clip is a staff member at the venue. The TikToker says that when they were finally informed of the tornado warning they were all told that they could not leave the venue.

“Then the rain starts pouring down so hard the pit starts filling. The pit that has electrical wiring in it,” she stresses. “People are screaming because the staff won’t let them out of the pit even though there’s electrical wiring, we could’ve all been electrocuted.”

Flooding in the pavilion came swiftly, and once there was word of a possible tornado threat, more attendees were pulled into designated safe zones and instructed to stay up until they were cleared to do so, according to Billboard. Video footage and pictures of partially submerged teens in ever-rising rainwater quickly went viral online, along with a clip of a rodent in the venue swimming towards the stage in search of higher ground to survive the flooding.

Kaida provides more context about her experience in a follow-up video.

She claims that at one point an attendee “bum-rushed” a staff member and slapped him down, which allowed people to exit the pit and run up the stairs away from potential electrical dangers. “The crazy part about this is they made sure the people that was working with them got out of the pit,” the TikToker claims.

Even though concert attendees were allegedly passing out and in duress, Kaida accuses staff members of laughing and not taking the situation seriously enough.

Even though the rain stopped, Kaida says the pit was still filled with water as whatever drainage system meant to divert precipitation was clearly not working. She adds that a member of Halsey’s team came out to assess the situation.

The venue assured concertgoers that the show would start in 15 minutes, however, the TikToker says guests were informed that the concert had been canceled shortly after.

Prior to its cancellation, however, the Merriweather Post Pavilion decided to delay the show twice, until ultimately deciding that it would be too dangerous to continue, despite stating that the concert would happen “rain or shine,” per Billboard.

Kaida says that she understands why Halsey didn’t come out in person to address her fans even if there wasn’t going to be a concert. She figured folks would “bum-rush the stage” and make an already unsafe situation worse.

The concert attendees then had to journey out of the pavilion, but Kaida alleges that the flood water some guests were standing in was “shit water.” She claims backup water from the toilet/septic system gurgled up through the plumbing into the venue.

“At the end of the day…I feel like this is the Pavilion’s fault,” Kaida argues. “Because nobody knew that there was gonna be a hurricane. Not Halsey, not us, we wouldn’t even have went.”

She claims that the venue and its staff did not properly handle the situation.

Halsey shared a message to her fans on Twitter once she learned that her team was calling off the show. “Maryland I don’t even know what to say. If you missed my live, I’ll post something soon explaining what happened,” the tweet reads. “But right now I’m heartbroken and panicked and I just want to know when/that you all get home safely. I love you guys more than anything.”

Halsey also stated on Twitter, “I promise I wanted to more than anything. But I couldn’t because it would have been SO unsafe if I went out there and people rushed the stage during or after the storm. A lot of things were out of my control tonight but I promise everything I COULD choose, I chose your safety.”

The singer went on to tweet that she was not pleased with the way the Merriweather handled the situation and noted that a follow-up concert would be taking place somewhere else.