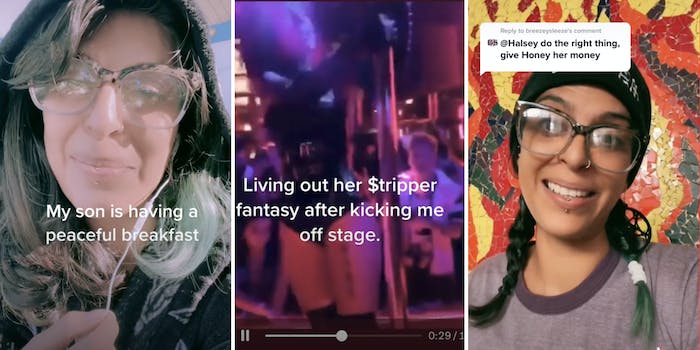 ‘I was taken off stage and humiliated’: Exotic dancer accuses Halsey of cutting her off to live out ‘stripper fantasy’ in viral TikTok

She said she ended the night with $20 because of the incident.

Exotic dancer and TikToker Honey LeStrange (@honeylestrange) put singer Halsey on blast, sharing a story from the time Halsey booked out Cheetahs, LeStrange’s workplace, to promote the singer’s 2019 single “Nightmare.” After apparently insisting that all dancers had to be there to perform that night—which LeStrange says is unusual when celebrities book out a club for an event—Halsey then had LeStrange pulled off the stage at the start of her set, costing her the chance to earn any money that night.

LeStrange said dancers don’t typically like working celebrity parties because of the poor pay. However, her fellow dancers were being tipped well throughout the night, which gave her hope that she would be paid well too.

LeStrange started her set, but was quickly interrupted by her manager who told her that Halsey was going to perform. When Halsey came on stage and started to dance themselves, people assumed they were the finale and littered the stage with money. Unfortunately they were not, and LeStrange was sent on again after them, when the majority of guests had run out of money and were already starting to leave.

While Halsey did give the money thrown at her stage to the other around 36 dancers to split, this amount only came to about $120 each. As strippers don’t receive an hourly wage and have to pay certain fees to the club in order to dance, even when the club demanded their presence, this left LeStrange with only about $20 to show for her night—despite having had to be there from 9 pm until well after 2 am.

Some commenters called on Halsey to “do the right thing” and pay LeStrange for her time at the event, but others defended the singer, saying that they must not have understood that their actions would leave LeStrange with nothing to show for the night. However LeStrange responded to this claim in another TikTok, saying “she knew…. if she did not know I don’t know how she made it to adulthood. And she fucking knows now.”

Speaking to the Daily Dot about the incident, LeStrange said, “The main thing I want is an an apology and an acknowledgment that it did happen. Regardless of whether those were her intentions, I was taken off stage and humiliated. I want to know that she has the compassion to see how embarrassing it would be for a regular person to perform after celebrity for pity scraps. If she apologized I would accept it.”

LeStrange clarified that, for her, the incident was not just about a loss of income, but a loss of the opportunity to perform in front of a large, energetic crowd.

“I will never know what it’s like to perform in front of thousands of people,” she said. “That tiny stage was my home. My passion. Even from just being up there wiping the pole I could tell it would have been the most amazing and memorable night of my whole career. Instead it was memorable for the wrong reasons. I spent 5 hours getting to see my friends get to experience something like that. I was right there. So close. If I hadn’t made it up there it would be bad timing. But I was there ready to perform. There was no reason she could not wait 3 mins to be the headliner that night.”

LeStrange also said that if Halsey truly wanted to support sex workers—a claim the singer has made in the past—she could support them by “donating to orgs, pushing policy change, speaking out against people who use us as props like I believe she did that night.”

“Supporting us doesn’t just mean pretending to be us for a night,” she concluded.

The Daily Dot reached out to a representative for Halsey for comment.