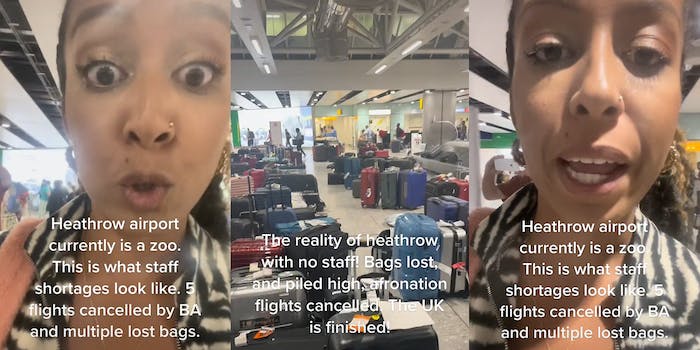 'People were coming off and on the plane like musical chairs, and now no one has our luggage.'

2022 may be the year of “Hot Girl Walks” and this not-so-hot-girl-walk, but it’s also the year of flight cancellations. It came as no surprise that after restrictions implemented in response to the COVID-19 pandemic were lifted, tons of people started booking flights to all of the places that they dreamed of going to after quarantine.

While airlines suffered a tough time under COVID, having to rely on taxpayers to bail them out after using a significant portion of their cash flows on stock buyback programs, it seems that they’re having a tough time post-COVID as well.

There were nearly more flights canceled in the first half of 2022 than there were in the entirety of 2021, and some of the most heavily trafficked dates of air travel are upon us due to summer vacations and long weekends.

Now, a viral TikTok has some people swearing off air travel for the immediate future. The clip, which was uploaded by user Georgina (@georginalawton) on Friday, shows absolute pandemonium at London Heathrow airport.

Her video received over 1.9 million views as of Saturday.

The TikTok shows an image of a messy pile of luggage and bags. “The reality of heathrow with no staff!” the text overlay reads. “Bags lost, and piled high, afronation flights cancelled. The UK is finished!”

“We’ve been here, five, six hours,” Georgina says in the video, while showing the state of disarray that the airport is in.

After their flight was canceled, Georgina says she hasn’t been able to find their luggage and, due to a lack of staff, can’t find anyone to help her.

In several other TikTok videos, she shows the sorry state of the United Kingdom’s largest airport, saying, “this is what the Government has done” to Heathrow in one clip.

When Georgina was finally able to find a staff member to help, she was told to go home and give employees a chance to suss out the luggage situation. She claims they told her to return the following day.

However, once she did return, airport employees still had not found her bag. Georgina was informed yet again to return home without her property.

@georginalawton Reply to @annnawolff i cried before and after this lol. Went all way back to heathrow this morn to be told go home we cant locate anything. No help rebooking! British airways are a shambles! #cancelledflights #flight #heathrowairport #britishairways #flightcancellations ♬ original sound – georginalawton

Ultimately, Georgina was able to make it back to Portugal, which is where she lives. But her journey was less than smooth and less than affordable. She was resolved to make it home that week in order to write about the Afro Nation festival, so she had to book a flight to Spain, and then take a 350-Euro taxi ($365 USD) from Spain into Portugal, which she shared with other travelers.

She also urged the airline to give her a refund. "British Airways loosen the purse strings," she wrote in the comments.

British Airways told the Daily Dot they took pre-emptive action to prevent a packed schedule that could result in mass cancellations and other issues, however, the airline offered an apology to its customers.

"We took pre-emptive action earlier this year to reduce our summer schedule to provide customers with as much notice as possible about any changes to their travel plans," British Airways told the Daily Dot via email. "As the entire aviation industry continues to face into the most challenging period in its history, regrettably it has become necessary to make some further reductions. We're in touch with customers to apologise and offer to rebook them or issue a full refund."

The airline also listed a number of reasons as to why it's so difficult for them to make their promised flights for customers happen, many of which were a result of the pandemic. They stated that the aviation industry has lost more than £145 billion and around 4 million jobs since the coronavirus pandemic began. British Airways also attributed the issue to rapidly increasing capacity from 30% to 80%.

They also said inaction from the English government played a role.

"The Transport Select Committee's report found that Government action was inconsistent, leaving the industry and passengers confused and unable to plan ahead," they said. "This resulted in a severe economic deficit for the aviation sector. England's coronavirus restrictions on international travel were imposed with no overall assessment of their impact—a point underlined by the recent report from the National Audit Office."

The Daily Dot has reached out to Georgina on via TikTok comment and email and Heathrow Airport via email.