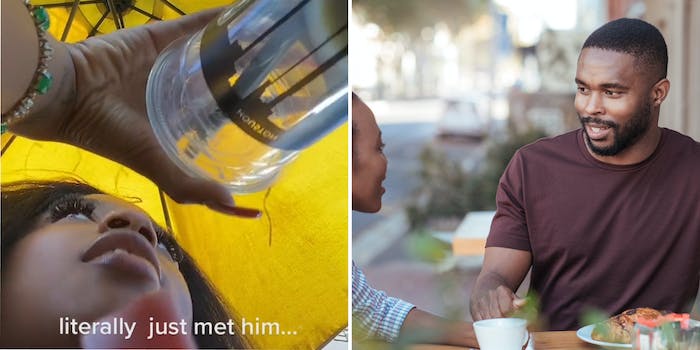 ‘You either come back to my place or walk’: Woman says date made her walk home after she refused to go home with him

'Are you going to get up and start walking?'

A woman on TikTok shared a video of her date telling her to either walk home or go back to his place. In a series of viral videos, user @jaipurlan documents a date gone wrong after she rejected her date’s invitation to go back to his apartment.

“Literally just met him,” the overlay text in the video reads.

“So you’re just going to sit on your phone?” the TikToker says in the video. While she doesn’t show his face, the man tells her: “Yeah, are you going to get up and start walking?”

“But you drove me here; that doesn’t make sense to me,” she says.

“We spent the whole day together obviously I’m attracted to you. I don’t know what the issue is. You can either come back to my place or walk,” the man says.

When she replies that she doesn’t know him that well to go back to his place, he claims he doesn’t have gas to waste if she won’t go home with him.

According to the TikToker’s Instagram caption, she paid him $20 worth of gas prior to the date as well as paid for both of their meals at the restaurant. She said he claimed it was because his check “hadn’t come in yet.” She wrote he did end up giving her $6 for his portion, though according to a follow-up video, the meal cost almost $20.

The creator uploaded a “part 2” in which the man allegedly calls her up to apologize and shows up at her place with flowers to explain in person. The TikToker clarified in the comments section that they were in his parked car when she began filming the follow-up video.

@jaipurlan Reply to @jaipurlan so this is part 2, watch my previous video for context . He brought flowers and wine begging to explain himself after having me walk home from our date. I didn’t even want to post this because I feel stupid for hopping in his car and entertaining this joke of a man.#fypシ #LENOVOJUSTBEYOU #houston ♬ original sound – jaipurlan

“You said it was a joke, but you didn’t say that before I left the table,” she starts in the video. “Like why did you wait two hours to tell me that shit.”

“Wasnt even that long of a walk so I don’t see why you’re complaining,” he replies. “Relax it wasnt that deep.”

“I mean 18 minutes?” she says.  “it was hot as fuck outside like 90-degree weather in the middle of the fucking day you could’ve told me it was a joke at the table.”

The TikToker accuses the man of being petty after she didn’t go home with him. According to him, she “ruined the vibes” when he brought up his daughter.

“How am I worried about the wrong thing if you told me you didn’t have no fucking kids in the first place?” she responds. “I don’t even date dudes with kids.”

It’s unclear how many views the original TikTok received before it was allegedly taken down, but the TikToker’s current video, posted on May 15, sits at just over 1.3 million views. The videos received thousands of comments with users urging the TikToker to “run.”

“Day 1 and he manipulating u,” one user wrote.

“He’s literally gaslighting you when you called him out for lying about not having a kid saying “I only have one kid and it’s not that big of a deal,” another wrote.

“He asked you out and didn’t have money to even pay his own way? Nah there would be no date,” a third commented.

Many users asked the TikToker to expose his name and social media, but in an Instagram Story, the TikToker said she met him in person and only had over-the-phone exchanges.

“And then he was blocked,” she wrote.