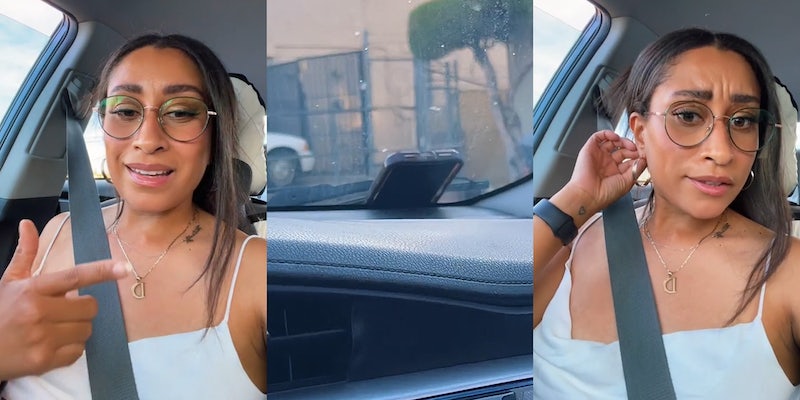 ‘Don’t touch it’: Woman finds iPhone on her windshield, sparking debate about whether it’s safe to answer it

'Leave it on the ground and go on about your day.'

When finding a lost phone, the typical instinct is to find the owner so that the phone can be returned.

However, with stories of people using products like Apple’s AirTags as a stalking tool going viral, people on the internet aren’t too sure about how to handle a surprise discovery of a smart product.

On TikTok, a woman claimed that someone left an iPhone on her car windshield.

While user Valisity (@valisitysarai) asks in the description if she is just “being paranoid” for not getting out of the car and looking at the phone, users supported her fear, with many advising her to hand the phone to the police rather than seek the owner herself.

Her first video currently has over 1.1 million views.

@valisitysarai Am I being paranoid?!? Like this is weird right???! #aita #fyp #helpme ♬ original sound – Valisity Sarai

“I’m like, are you trying to track me and steal me?” she asks in the video. “Like, if I answer the phone, are we going to, like, meet up to exchange your phone and you, like, kidnap me?”

Users advised her to be cautious, encouraging her to simply hand the phone to the police, the closest business, or to simply leave it where it is.

“Leave it on the ground and go on about your day,” wrote one commenter.

“Don’t touch it, drive straight to the police station and let them handle it,” a second suggested.

Others stated that there was most likely a more innocent explanation.

“She probably dropped it between your cars. A passerby saw it and had a 50/50 chance of choosing the right car. Then put it there, just being nice,” offered a user.

“Maybe someone dropped it and someone else thought it was yours,” agreed a second. Valisity responded to this comment in agreement, saying it was her “second thought.”

While some commenters accused Valisity of being overly paranoid, it wouldn’t be the first time a location-enabled smart product has been used to track someone.

Earlier in the year, a man was killed by his girlfriend after she used an AirTag to follow him to a bar, where he was meeting another woman.

In another case, a man was convicted after allegedly using an AirTag to stalk an ex-girlfriend for nine weeks.

Apple has implemented some safeguards against this. Up-to-date iOS devices will give users notifications if another Apple GPS-enabled product has been detected in their vicinity, allowing users to be better aware of whether they are being tracked.

In two updates, Valisity said she simply gave the phone to her cousin, who was not afraid of the potential negative consequences.

In these videos, she says she was “genuinely terrified” and drove straight to her boyfriend’s house afterward. She notes that both her and her cousin are currently fine.

While she says she thinks her anxiety may have impacted her decision, users supported Valisity.

“Your thought process and reasoning was absolutely not down. You did the right thing,” wrote one user. “You were alone, you didn’t get out&touch it. You got to your bf!”

We’ve reached out to Valisity via email.