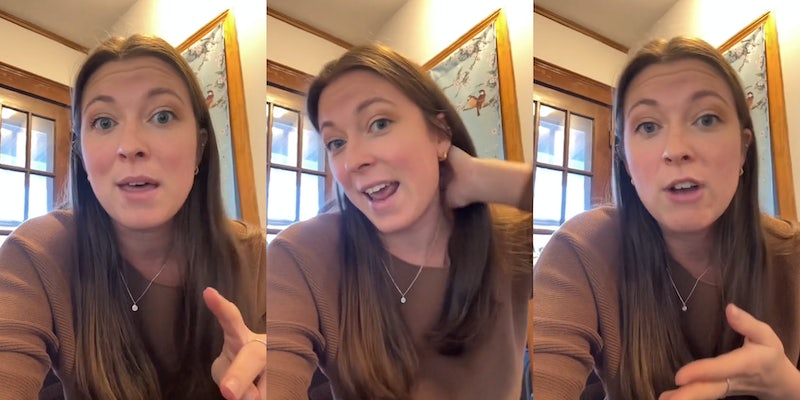 ‘It’s also really important for new hires to have boundaries.’

In a viral TikTok, a woman says that she was reprimanded by her manager after she corrected a new hire who made an inappropriate comment, which she likened to something someone might say in a “locker room.”

TikTok user @stillpoorandhungry, who shares workplace stories on multiple TikTok accounts, posted the video on Saturday. She says that a new hire at her job made a “disrespectful, inappropriate” comment to her, which she promptly corrected.

“I said, ‘Hey, don’t talk to me like that, don’t say that to me, don’t speak to me that way,” @stillpoorandhungry says in her video.

She says the new hire called her “sensitive,” and that a manager—not her direct manager—told her that her behavior was “wildly out of line” and that their job was to “make new hires feel welcome.”

“It’s also really important that new hires understand boundaries,” @stillpoorandhungry says in her video. “And if they’re doing something inappropriate, they should know right away.”

The TikToker says that the manager then told her to “publicly apologize” to everyone, which she declined.

On Thursday, @stillpoorandhungry’s video had over a million views.

In a comment on her video, the TikToker said that the new hire’s comment pertained to “something strange about my work ethic/quality.”

“And no one laughed,” @stillpoorandhungry commented. She also says she went on to have a “great professional relationship with the co-worker.”

In a follow-up video addressing how many views her video got, @stillpoorandhungry says that she received a lot of hateful comments telling her that she was a “monster.” Some comments on her viral video called the TikToker a “Karen” and said that she “talked down” to the new hire.

But others praised @stillpoorandhungry for what they felt was a solid way of taking control of the situation.

“The audacity of that manager,” @user62750261518 commented. “Managers do *not* get to set personal boundaries for employees.”

“You’re in the right, @ericalovespizza wrote. “You need to set the tone for what’s to come.”

The Daily Dot reached out to @stillpoorandhungry via contact form. She did not immediately respond for comment.