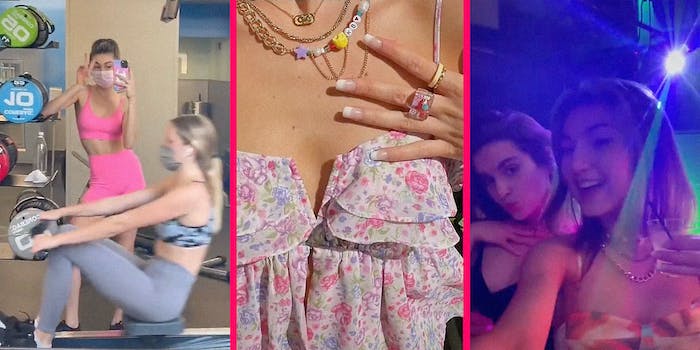 ‘The way she said “go on my friend’s boat” so casually’: Day in the life of a fashion influencer TikTok leaves internet reeling

"Time to make some rich friends.'

A TikTok influencer who shared a day in her “life as a fashion student in New York” has prompted backlash after people felt it highlighted the divide between how the wealthy and well-connected live compared to the rest of us.

The video, initially posted by @kateebartlett on TikTok, has racked up a million views on the platform and another 3.6 million on Twitter.

“I woke up and went to the gym with my roommate,” Bartlett says in the video, starting off innocuously enough.

But from there, she shows off the pile of PR gifts waiting for her at home, before spending the afternoon at Central Park with her friends, making bead necklaces, and taking Instagram photos.

Bartlett briefly mentions going to class after that, then stops at home to try on some free outfits for a brand deal, and ends the night by casually spending an evening on her friend’s boat with a group of gal pals.

It’s the easy breezy sort of NYC lifestyle popularized by shows like Sex & the City back in the day, but one that’s far from a reality for most people who’ve lived in New York—or anywhere, for that matter.

“You either have great organizational/time skills or you don’t get that much work cause as a design student here….. I’m dying,” one TikTok user commented.

Twitter users who watched the short video were even more blunt, often pointing out that it requires money and privilege to be able to spend your time this way, especially in a pandemic.

“[T]he way she said ‘go on my friend’s boat’ so casually,” tweeted @MIUCCIAMUSE in disbelief.

Bartlett did have her defenders, with some people jumping in to point out that hating on “people for having fun, having finances that adequately support them, and living a life they enjoy is so weird,” and that making assumptions on one girl based on one video—as unrelatable as it is—might not be fair.

“She’s not trying to brag I don’t think, she was just doing what she normally does it looks like?” @soft_les_angel wrote. “And even so, there’s plenty of poor tiktoks to follow—I follow a lot of them to get hacks bc I’m a poor college student myself.”

The endless debate surrounding the “influencer lifestyle” and whether it sets unrealistic expectations for their peers will continue, regardless of Bartlett’s specific TikToks or the commentary surrounding them.

But watching someone live such a seemingly carefree life, even if it only looks that way on camera, and even if you don’t individually wish them ill, can still be a tough pill to swallow as the world struggles to get out from under the damage caused by the last of the pandemic… and the decades of class inequality that preceded it.