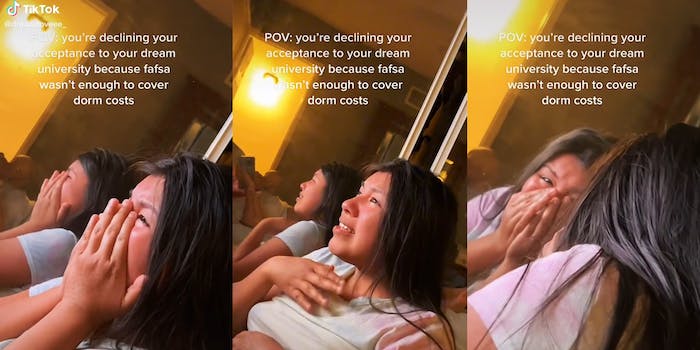 ‘The price of college in America is unfair as it is’: Girl has to turn down acceptance to ‘dream college’ because FASFA won’t even cover dorm, sparking debate

'The sad reality of a lot of Hispanic students wanting a higher education.'

A TikToker recently shared her sister’s experience applying to her “dream university.” According to user @dreaaaloveee_, her sister will not be able to attend her dream school, Chico State, because Federal Student Aid (FAFSA) “wasn’t enough to cover dorm costs.”

The video shows @dreaaaloveee_’s sister crying, which the user says lasted for over an hour.

The TikTok currently has over 2.5 million views.

In the comments section, @dreaaaloveee_ elaborated on the situation.

“We did call [her counselor] & went over the #s online,” she said. “Using the grants & the loans given we would still have to pay over $6K out of pocket plus $400 deposit to even try to secure a dorm.”

Americans spend more on university than nearly any other country for an education that is the same or worse than comparable nations, according to Forbes and the New York Times. This year, the average private university’s annual tuition and fees in the United States amounts to nearly $40,000, with public out-of-state schools costing around $23,000 and public in-state schools hitting just over $10,000.

In contrast, to get a degree in Germany, which is available to Americans, one must simply pay an administrative fee of less than $300.

While @dreaaaloveee_’s sister was distraught about her situation, commenters noted that she still had options to appeal the decision.

“Try calling admissions and the registrars office, you can try negotiating with them on tuition!” a user suggested.

“No wait don’t do this, i called and asked for a scholarship that i qualified for and they gave it to me,” another added.

“Here in Chico there’s so many apartments that are cheaper! Get a job that pays good, I’m able to afford everything with Panda Express,” a commenter noted.

These comments motivated @dreaaaloveee_’s sister to consider appealing the decision, as explained in a follow-up posted by @dreaaaloveee_.

While these solutions may allow @dreaaaloveee_’s sister to attend her dream school, the problem of high university tuition remains.

“The sad reality of alot of hispanic students wanting a higher education. Sometimes we have the brains just not the funds,” one viewer said.