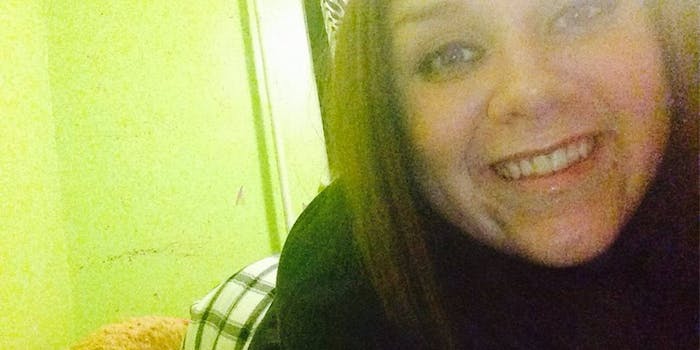 More than 7,000 people have watched the tragic video.

A teen’s innocuous Facebook Live video has turned into a tragic snuff film.

“Are you going live?” 19-year-old Chaniya Morrison-Toomey asked her friend Brooke Miranda Hughes, 19, who was filming herself driving just after midnight on Tuesday. Moments later, a tractor-trailer rammed into the back of their car. Both teens were declared dead at the scene, according to the Scranton Times-Tribune.

The accident has been viewed more than 7,000 times on Hughes’ Facebook page. The video will not be removed by Facebook, a spokesperson told the Washington Post, because it doesn’t technically violate the company’s terms of service, which allow even the most jarring videos—like a dog being beaten and hanged—so long as they don’t appear to “celebrate or glorify violence.”

“However, a graphic warning screen has been added, auto-play has been disabled and it is not accessible for users under the age of 18,” the spokesperson told Washington Post. “Additionally, the user’s account has been memorialized.”

But what Facebook Live often provides—or at least what makes the news—is a bleak, sordid first-person view of accidents, tragedies, and unfortunate mistakes spurred in no small part by the access to a powerful broadcast platform. In the last six months, Facebook Live has captured a chilling murder confession, a heroin overdose, and perhaps most notably, the aftermath of the fatal police shooting of Diamond Reynolds.

The platform is also pushing extreme athletes to terrifying new heights as they compete in an escalating race for views and engagement. In August, a man died while livestreaming a solo wingsuit flight in the Swiss Alps.

This is hardly the first time Facebook Live has been involved in a car accident. Earlier this month a driver crashed his vehicle after filming himself going 115 mph, and in November, a man livestreamed his high-speed chase in a police cruiser he had just stolen.

Authorities say Hughes was driving slowly on the interstate when the accident occurred and that one of the wheels of the car was using a spare tire.

Their Facebook Live video continues for several minutes after the accident. A man can be seen shortly before the eight-minute video ends.

Michael Jay Parks, the driver of the tractor-trailer that killed Hughes and Morrison-Toomey was not injured, the Associated Press reports, and no charges have been filed. The investigation is ongoing.