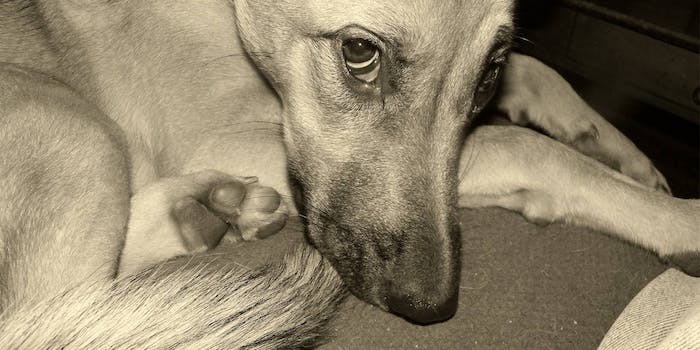 Facebook refuses to remove this video of a dog being beaten and hanged, and here’s why

The social network condemns the act, but will continue to host the video.

Facebook has an interesting problem on its hands: The company really, really wants you to watch videos on its platform, but some of the videos that people upload are either off-the-wall bonkers or just plain grotesque.

In one particular case—a video of a dog being viciously beaten, hanged, and possibly fatally wounded—Facebook has taken the stance that the video will remain available for all to see.

A censored screenshot of the video

The video in question was posted in July on a public Facebook page called Julie EG Oficial [sic]. The page itself, which consists entirely of reposted photos stolen from popular Twitter user Sadkitcat, has been active since June, and the graphic clip appears to be the only video that’s been posted to the account.

At just under a minute in length, the video shows a man hanging a dog by its neck from a metal pole. The animal desperately struggles to breathe but eventually goes limp. Once the man lets the dog down, it appears dead, but he proceeds to drag it across the ground and then viciously beats it as it regains consciousness. Yelping in pain, the dog appears near death, lying helplessly as it absorbs the punishment. The video ends with the animal reeling in pain.

The post that accompanies the video seems to condemn the act, presumably directing an insult at the man who is doing the beating.

It probably goes without saying, but the 52-second clip is hard to watch. The video is age-gated, and only users who are logged in and over the age of 18 can view it. There’s also a warning on the video window that notes that the content may “shock, offend and upset.”

The video has been reported as offensive multiple times, but those reports have been met with resistance from Facebook. The social network’s formal reply to reports of the video notes that it does not violate community standards.

Facebook has long been a place where people share their experiences and raise awareness about important issues. Sometimes, those experiences and issues involve violence and graphic images of public interest or concern, such as human rights abuses or acts of terrorism. In many instances, when people share this type of content, they are condemning it or raising awareness about it. We remove graphic images when they are shared for sadistic pleasure or to celebrate or glorify violence.

When people share anything on Facebook, we expect that they will share it responsibly, including carefully choosing who will see that content. We also ask that people warn their audience about what they are about to see if it includes graphic violence.

A Facebook spokesperson told the Daily Dot that the reason this video remains published is that the post itself is condemning the behavior shown in the clip.

“Like others, we find the behavior in this video upsetting and disturbing,” Facebook’s spokesperson explained. “In cases like these, we face a difficult choice: balancing people’s desire to raise awareness of behavior like this against the disturbing nature of the video. We will remove instances of the video from Facebook that are shared supporting or encouraging this behavior. In cases where people are raising awareness or condemning the practice, we will mark the videos as disturbing, which means they have a warning screen and are accessible only to people over the age of 18.”

In short, if the video had been accompanied by text that said “This is great!” instead of “You’re a stupid person,” it would have been removed and wiped from the site.

That’s a small but important distinction to Facebook, which is home to many activism and awareness movements that feature disturbing videos in the hopes of raising the public’s attention. Clips of violence against minorities, graphic scenes of atrocities captured by journalists around the world, and, in this case, violent animal abuse are spread with the hopes that similar tragedies will be prevented.

However, in a case such as this, where the account itself is just an attempt at ripping off someone else’s content and the video post does little more than highlight the violence, it’s unclear how much good it is actually doing. It also raises the question of whether Facebook users hoping to spread such violent imagery in a negative way can simply put a frowning emoji on their posts and gain immunity.

It’s a blurry line, and while Facebook’s stance is itself good-natured, the result is a social network that willfully hosts violent and gruesome imagery with the bleak hope that some day it won’t have to.