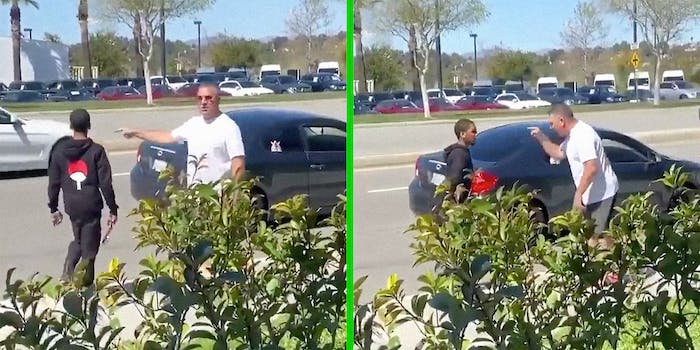 'Go back into your little cage until the monkey controller gets here.'

The video, posted by @whatsupscv, was recorded in Valencia, California, and widely shared with commenters asking for information on the racist. The man arguing with the Black driver was soon identified as ex-LAPD detective John Motto. The event occurred after both parties stopped following a minor collision.

Motto is heard telling the Black driver during the altercation: “Go back into your little cage until the monkey controller gets here.”

The clearly angered Black man asks a group of witnesses, including the videographer, if they heard Motto call him an anti-Black slur.

Motto then says, “No, he started the n*gger thing because he is the dumb n*gger.”

Per Newsweek, the LAPD confirmed the man was a former employee without directly identifying him. However, he was later identified by LAPD’s media relations as a retired detective assigned to their homicide team.

Los Angeles County District Attorney George Gascón tweeted: “The video in question is disturbing & involves a former homicide detective exhibiting racist tendencies. @LADAOffice is taking immediate action & has identified several cases where this individual was a witness. We are in the process of notifying defense attorneys in such cases.”

Though Motto is retired and can’t be punished by the LAPD, the department and the Los Angeles District Attorney’s office said they would re-assess the 370 cases managed by the former detective. It appears it will be a thorough investigation.

“Under the law, we are required, once we are aware of someone having racist tendencies, as in the case of the individual, we have to notify all the defense lawyers in all the cases that this individual may have been a witness or participated in the investigation,” Gascón said Wednesday, per CBS LA.

One civil right attorney added specificity to what the investigation into the ex-LAPD detective would look like.