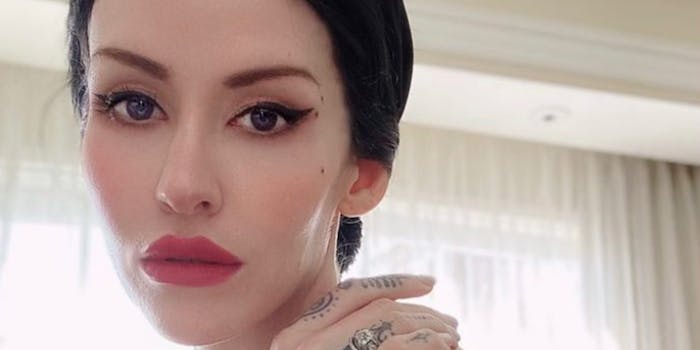 Wood said it was their attempt to silence her and that it prompted her to file a police report.

Evan Rachel Wood—who named Marilyn Manson as her abuser and has been sharing allegations against him ever since—is alleging that Manson’s wife threatened to release her underage photos in 2020.

Wood made the allegation on her Instagram Story on Saturday, according to the Hollywood Reporter. She said Lindsay Elizabeth Warner, Manson’s wife, was “conspiring to release photos of me when I was UNDERAGE, after being given large amounts of drugs and alcohol.”

She said it was their attempt to silence her, and it prompted her to file a police report on Dec. 19.

According to the Hollywood Reporter, Wood posted a photo of the report, censoring out personal details.

Wood’s story was no longer available on Sunday, as a story is only available for 24 hours after an Instagrammer uploads it.

Wood previously accused Manson, whose real name is Brian Hugh Warner, of using the word “Jew” as an insult and drawing swastikas on her bedside table when he was angry with her. She also said he would commonly use the N-word.

“Everyone around him was expected to laugh and join in,” she said. “If you did not or (god forbid) called him out, you were singled out and abused more. I have never been more scared in my life.”

Wood was the first person to go public with abuse allegations against Manson, who she says “groomed” her since she was a teenager. Her allegations sparked a series of similar allegations of abuse, grooming, and psychological torture by numerous others.

On Saturday, she shared a series of Instagram Stories by filmmaker Spencer Rollins, who claimed he was repeatedly harassed and threatened by Manson for his friendship with Wood.

Rollins said he was put through the “mental torture” of random men calling him after finding his number on a male prostitute website, which put him in a constant state of panic.

“I can corroborate alot of what is on [Rollins’] story right now,” Wood wrote in an Instagram Story on Saturday, “because Brian also horribly abused me during this time for ever even speaking to Spencer, and I personally witnessed Brian harassing [Rollins], for no reason, for a long time.”

Rollins’ Instagram was set to private on Sunday when the Daily Dot ran a search, but his Instagram Stories, where he detailed these allegations, were screenshotted and shared by Wood on her Instagram Story.