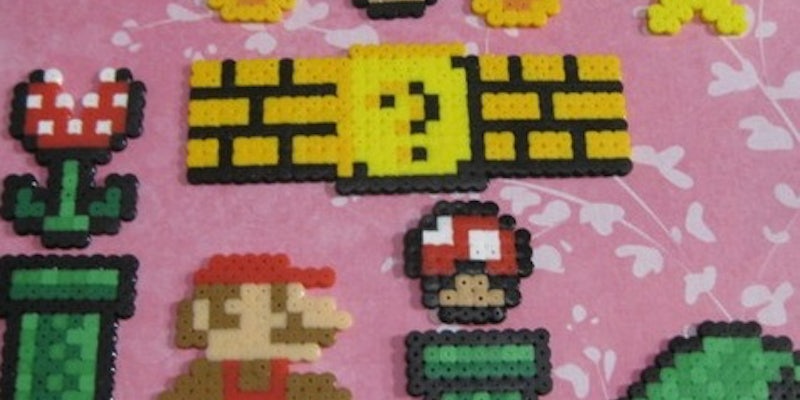 12 Days of Etsy: 8-bit heroes for the holidays

This could be the perfect gift for fans of vintage video games.

Since the early ‘80s, Christmas morning has brought but one hope for millions: a spanking new games console wrapped under our tree. As technology has advanced and games have grown more graphically rich, there remains a large number of people who hold great affection for blocky, crude characters of consoles like the Nintendo Entertainment System and the Sega Master System.

Through her Etsy store 8bitbytes, Tamara Golia creates and sells real-life 2D versions of classic video game icons, from Final Fantasy characters and Tetris blocks to Mario and Luigi and Minecraft pins. The bead designs are complemented by a few other items such as Pokemon hats.

She’s been “spriting” (as the practice is called) for almost 12 years, at first selling her creations at conventions before a friend turned her to Etsy in 2009. Golia believes her sprites “bring back a simpler time in gaming” and can make one relive their “favorite or worst moments in gaming.”

Golia’s been a fan of games since she played Duck Hunt while sitting on her grandpa’s lap as a child.

“There is a special kind of bonding that happens when you game with others,” she said, noting that the hard work involved in cooperating to finish a game “shared with someone you care about” is the best part of gaming.

Around Christmas in 2009, Golia’s shop took off on Etsy, and her experience since has been both “rewarding and hard at times.” Since her method is easy to replicate, she tends not to list too many custom pieces. While those orders can prove difficult to balance with the demands of a full-time job, they’re often the most rewarding since a customer has put faith in Golia to create the perfect gift they are looking for.

One particular commission stood out for Golia this year:

“The guy wanted me to make a large 8′ 11″ frame with Link [the main character in the Legend of Zelda series] holding a heart up in the center of the frame. I didn’t think anything of it till I continued to read. He requested that I put a picture of him and his girlfriend into the picture frame. He wanted me to hand write with gold sharpie “would you level up with me” on it. So he used my picture frame to propose to his girlfriend since he was going to have her open it. I made two special heart badges for them in gold as a gift to them for the event. It was so wonderful to do the piece. Even better when I got a photo of the two of them smiling wearing the pin.”

Golia, who says the Pokemon pin set is her favorite of her crafts, feels a handmade gift carries more weight than something store-bought. Even if she can’t manage to make gifts for friends and family herself, she’ll support another Etsy community member by ordering from them.

“They have families too, and I know that like me they are going to put everything they have into each product they make,” she said, “because they want that gift to mean something.”

Golia’s certainly doing her part to put more meaning into gifting, one bit at a time.