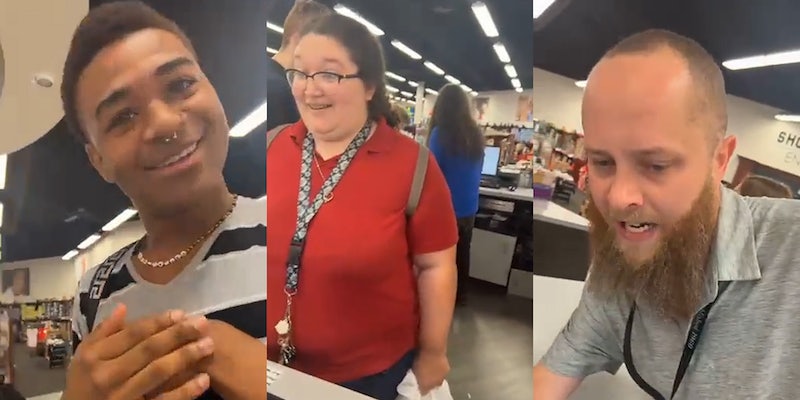 ‘When the entire staff decides to quit the shoe department in a matter of minutes’: TikToker films herself and fellow co-workers quitting their jobs at the same time, sparking debate

'We need to do this at every single job until they pay us living wages.'

A TikTok video of an entire staff of employees simultaneously quitting their jobs at a mall-based Shoe Department store went viral this week.

User @garwood8812 films the scene in real-time, focusing on co-workers and asking them how they feel about quitting.

“Okay, so the whole shoe department crew is leaving. How are you feeling?” she asks one of her co-workers. One of them reveals a bag of clothes from his locker and claims he’s feeling great. The camera shifts to each co-worker as the TikToker asks them the same question. Two other co-workers say they feel the same, one flipped off the camera, another indifferent, and one felt unsure.

“When the entire staff decides to quit the shoe department in a matter of minutes. To our [direct manager], we all hated you and don’t forget to fix those window displays. Shoe department you’ve been real, you’ve been fun, but you sure as hell haven’t been real fun,” the user added in the caption.

According to one of the comments posted by @garwood8812, she claimed the incident occurred in Lynchburg, Virginia.

The video received over 364,000 views as of Thursday. Some viewers were happy the staff quit.

@garwood8812 When the entire staff decides to quit the shoe department in a matter of minutes. To our DM, we all hated you and dont forget to fix those window displays 😉. Shoe department youve been real, youve been fun, but you sure as hell havent been real fun ✌🏻 #greenscreenvideo #shoedeptencore #shoedept #Buffering #seeyanever ♬ original sound – Garwood8812

“Wow , good for guys Standing Up. Good thing are coming in all the staff ways,” one viewer wrote.

“Good on y’all it’s not easy but real change takes something drastic like this,” a second said.

“This generation ain’t for play!! I’m here for it!” another said.

Other users empathized with the crew, sharing their stories about working in the shoe department.

“I work for the shoe department in my town they stole money from me and promise me commission never saw it,” one person shared.

“Worked with Shoe Show for two years (theyre sister company) and I can say no context needed. That whole corporation is evil [including direct managers] and higher ups,” a second stated.

“I worked in a shoe dept dorm 2 weeks..worst job ever for me,” a third concurred.

While the TikToker has not specified the reason as to why they all quit, she assured in a comment that it was not because of the pay. In another comment, she wrote that it was about “making a statement.” The trend of workers quitting isn’t something new, especially since we’re in the era called “The Great Resignation” where employees are quitting in droves. Recently, there have been workers from Amazon and Starbucks who are protesting their jobs for better treatment. Pew Research found that 63 percent of people are leaving due to poor pay/no career growth. Additionally, 57 percent claimed that they felt disrespected in the workplace.