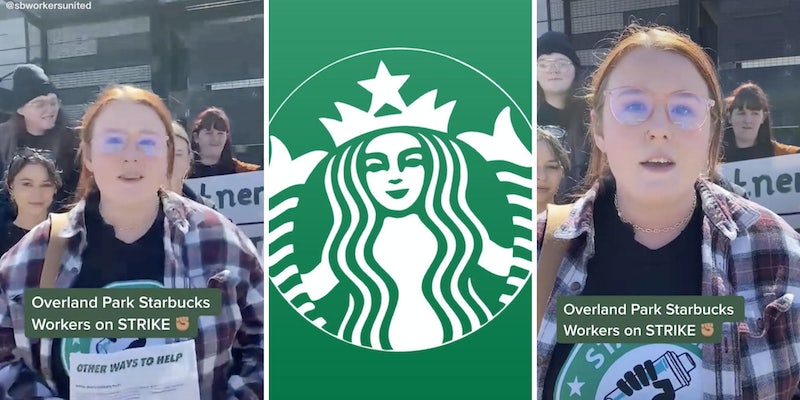 Workers at Starbucks across the country at pushing for unions.

Starbucks workers in Overland Park, Kansas announced a strike due to ongoing conflicts with management over unionization efforts, according to a viral TikTok.

In the TikTok posted to the Starbucks Workers United union page, workers can be seen holding signs and pamphlets asking for solidarity and support. According to the video, workers at the store have faced retaliation from their district manager over attempts to unionize.

“We have faced dress code write-ups, accusations of theft, and also cut hours. Union leaders have been pushed out, and we are just trying to form a partnership with the company we love,” the worker said.

The TikTok amassed 1 million views in three days. In the comments, the union elaborated that management started enforcing minor dress code violations that were previously a non-issue, which the workers believe is in retaliation to unionization efforts. Some commenters encouraged the employees to hold the line and stay strong, while others said the workers should “find a different job.”

“so y’all don’t follow the guidelines and got in trouble and that’s why you want to be in the Union? bruh smh,” said a commenter.

Despite the occasional anti-union sentiment, the vast majority of the comments were supportive.

“We spend too damn much money for coffee just to have mistreated employees!” said another.

The strike comes on the heels of Starbucks around the country voting to unionize, with a Seattle store voting in favor of unionization on Wednesday and over 100 other stores petitioning for unionization.

Howard Schultz, the former anti-union chairman of Starbucks, is set to take over as interim chair of the company. Schultz served as chairman from 1986 to 2000 and again from 2008 to 2017. Schultz returns after CEO Kevin Johnson, who served as chief executive since 2017, announced his retirement earlier this month. It remains unclear how Schultz will deal with the growing unionization movement.

The Daily Dot reached out to Starbucks and the Starbucks Workers United union for comment via email.

Update 9:40 am CT, March 24: In a statement to the Daily Dot, the Starbucks Workers United union announced it filed charges against Starbucks through the National Labor Review Board for threatening and retaliatory behavior against workers.

In the statement, shift supervisor Hannah Edwards shared her feelings on the Overland Park strike.

“The response to our union campaign from our district manager, Sara Jenkins has been aggressive,” she said. “She has cornered us one on one, sometimes with another manager to intimidate us. Forced us to decide between being demoted, resigning, or changing availability that conflicts with college classes and second jobs … We want the one-on-ones to stop … our organization is legal and protected by law and we expect that to be respected going forward.”