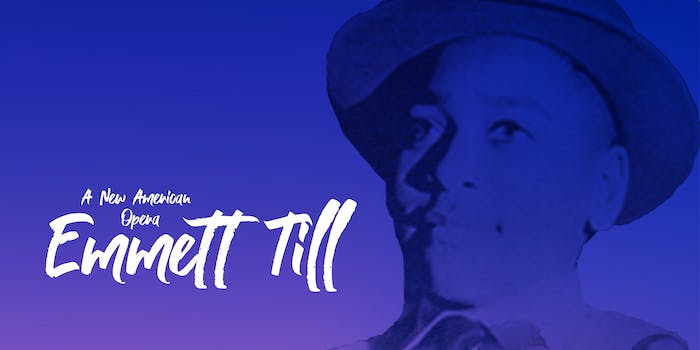 'We don’t need this from the POV of a white person.'

Playbill announced that “Emmett Till, A New American Opera” will be premiering at New York City’s John Jay College on March 23. The show was written by a white woman and has a white woman as its main character. Many people expressed that the show’s framing is inappropriate and disrespectful on Twitter.

“Emmett Till, A New American Opera” was written by Claire Coss and follows Roanne Taylor, a white woman who “is against Jim Crow laws, segregation and the racial inequality that she sees around her but remains silent,” according to Playbill. Taylor is also the show’s only fictional character; the opera mainly features Coss’ adaptations of real people involved in Till’s story, including his mother Mamie Till and Carolyn Bryant, the white woman who said Till whistled at her, which led to the teenager being lynched.

The show is also presented in conjunction with John Jay College, Opera Noire International, the Harlem Chamber Players, and Harlem Arts Alliance, as reported by Playbill. Coss has also written other works about Till’s story.

While Playbill’s tweet announcing the premiere of the show has less than 200 likes at the time of publication, it had more than 2,000 retweets and quote tweets, the latter of which shed light on how many people of color feel about Coss’ take on Till’s tragic story.

“Absolutely not. We don’t need this from the POV of a white person,” @haleybesser tweeted. The Twitter user also called the show “gross.”

“THIS IS DISRESPECTFUL!!!!!” @kellie_pryor tweeted.

Other Twitter users called the show a white savior narrative, or a story that focuses on how white people saved people of color from racism, an example of white guilt, blasphemous, and shameful. And @suprejaxicle tweeted that he would be attending the show so that he could “shit on the floor” during the production.

In a 2009 piece for On The Issues Magazine, playwright Coss wrote about her main character, Roanne Taylor’s, motivations and struggles in her play “Emmett, Down in My Heart.“

“Roanne is haunted by Emmett Till’s screams and by her insistence that there was nothing she could do,” Coss wrote. “Her acute distress forces her to face Emmett Till, Mamie Till, his Aunt Lizzy and Uncle Mose and Cuz, her former students Carolyn and Roy Bryant, her own immobilizing fear, and her struggle for the moral courage to act.”

As is evident in Coss’ phrasing, the story revolves around Taylor’s reckoning with the series of horrific events, rather than Till, his mother, or another Black person’s.

“Really??” they tweeted. “A black boy dies and you make a fucking play from the perspective of a fictional white woman so we can pity her instead??”

The Daily Dot has reached out to Playbill via email and John Jay college via phone. The Daily Dot was not able to reach Coss herself.