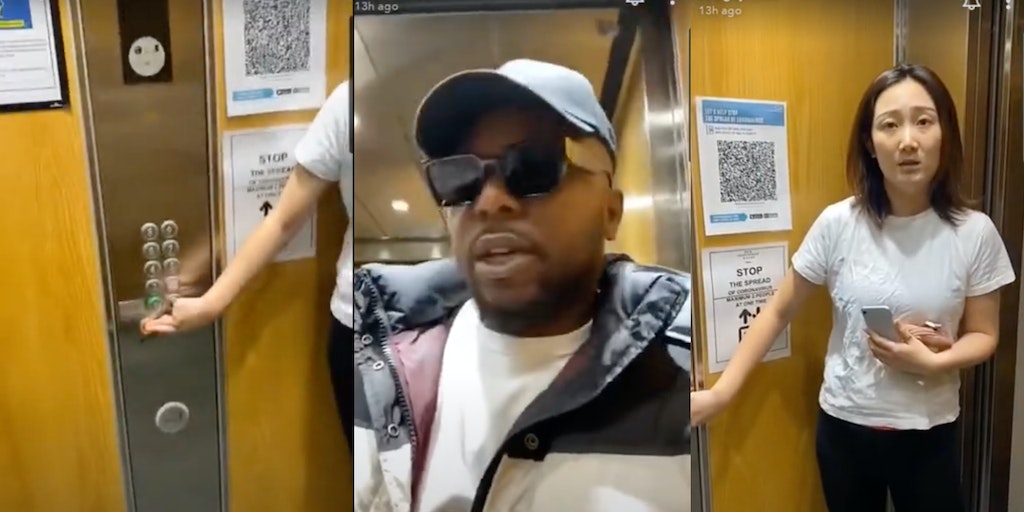 ‘Karen’ refuses to share elevator with Black man, tells him to get out

She holds the elevator door open, waiting for him to leave.

A now-viral video depicts an Asian woman refusing to share an elevator with a Black man.

In the video, recorded by London-based promoter Badguy Toba and reposted by a YouTube channel that hosts “Karen” content, the woman declines to shut the elevator door once the two are in the lift. She later asks Toba to leave the elevator.

“It says there two people,” Toba says in the video, zooming in on a sign that says only two people at a time are allowed in the lift to mitigate the spread of the coronavirus.

“This is kidnapping,” he continues. “Holding someone without their fucking will.” Toba repeatedly says he has somewhere to be before yelling at the woman to, “Let the lift go!”

“You’re going to be famous today,” Toba then tells the woman, who continues to hold the elevator door open.

When Toba asks her why she’s holding the door open, she responds by saying, “You have to go out.”

“She doesn’t want to lift to go because I’m in the lift,” he says into the camera. “That’s not true,” the woman says before calling him “rude” and falsely claiming that Toba told her she has “corona.”

“I said it?” Toba responds, “Now you want to put lies. You think if you had corona, I would be in the lift with you? Continue lying.”

The video ends with the woman pressing the elevator alarm button. She later leaves the elevator after another woman enters the lift.