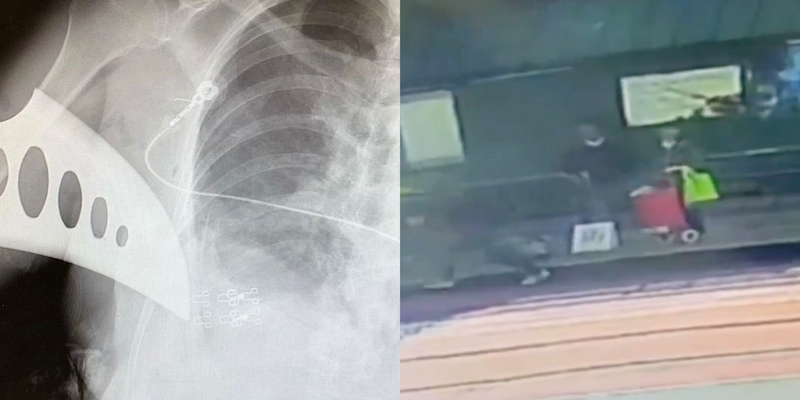 'We need to put as much pressure as possible to get this guy prosecuted.'

While waiting for the bus in San Francisco, two elderly Asian women were stabbed with a knife. Surveillance footage captured the interaction of a man calmly walking up to the two women, striking both, and walking away in the same nonchalant manner.

Since being shared to Twitter this week, the video has been viewed more than 270,000 times.

Since the start of the pandemic, Asian hate crimes have only continued to rise. According to a report by the Center for the Study of Hate and Extremism at California State University, San Bernardino, anti-Asian hate crimes surged by 164% between the first quarter of 2020 and 2021 across 16 major cities. New York City saw the largest percentage change, with an increase of 223%.

The surveillance footage shows a man approach the two women from behind. Mrs. Fong, 85, carries a lime green bag on one arm, hand holding a red trolley in the other. The man strikes the 65-year-old woman next to her, who runs away, leaving her bag on the ground. He then stabs Fong twice, who falls down as a bystander approaches to help. The man walks away calmly.

In response to the video, people were filled with outrage and numbness, especially toward the lack of visibility from those outside the Asian American and Pacific Islander community.

“The silence from non-AAPI communities is very telling and says all I need to know about the value of Asian lives in our culture,” one user tweeted in response to the video. “I used to think pushing for awareness was key, but at this point, I’m starting to realize that people just don’t care.”

Dion Lim, a news anchor and reporter for ABC7 San Francisco known for reporting on anti-Asian violence, was in contact with the victims and their family about what they were comfortable sharing. On Instagram, she reported that Fong was stabbed in the arm and chest and the other woman was stabbed in the back and has two broken bones. The knife, with a serrated blade longer than Fong’s arm, However, both are recovering after surgery.

Lim debated sharing the video of the stabbing and photos of the x-ray of the knife in Fong’s body but after consulting with her grandson, they both decided that it was necessary to put pressure to find the perpetrator and show the severity of anti-Asian hate crimes.

According to Lim, the alleged perpetrator, 54-year-old Patrick Thompson, was let out on mental health diversion, which is a program in California where if a defendant with a mental health disorder successfully completes mental health treatment, their criminal charges will be dismissed. The perpetrator was supposed to be in jail for 25 years to life with a criminal history that included assault with a deadly weapon and battery with serious bodily injury.

Lim shares the reality of what it is to be an Asian person in light of the uptick in anti-Asian hate crimes and violence. An Asian woman sent Lim a photo of what she carries around while doing simple errands and shopping in San Francisco. A mask. A small handbag. Hand sanitizer. And a baseball bat.

“I’m amazed at how many people have DM’d to say they carry similar things with them nowadays too,” Lim commented.

People in the comments shared the ways hate crimes have changed the ways they navigate everyday life out of protection. Leaving their purse at home, no longer taking late night appointments, and even bulletproof vests.

Animosity and violence toward Asians is not a new phenomenon but in light of Asian American and Pacifc Islander Heritage Month, members of the AAPI community are continuing to speak out and urging others to learn about the history of Asian Americans in the United States.

“Today is the start of Asian Pacific American Heritage Month and I ask you (everyone not just AAPIs) to do at least one action,” tweeted Congressman Andy Kim. “It’s been a tough year for AAPIs. Hear us, see us for who we are.”