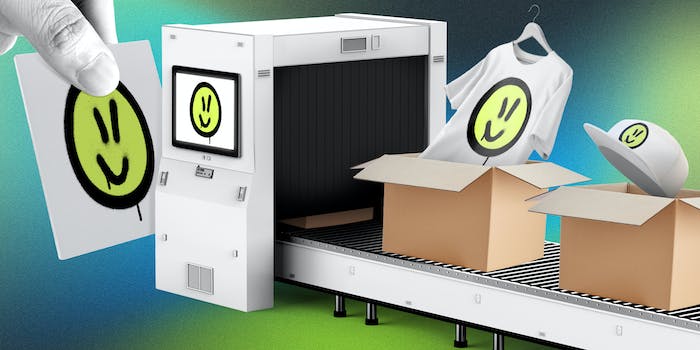 ‘Once they get your design, it’s like a death kiss’: Independent designers speak out against ecommerce giants like Alibaba and SHEIN

'I'm making, like, little to no money from my work as a designer. And someone else is profiting off it.'

Paulina Dracz, a U.K.-based designer, runs Front Lawn Utopia, an online shop selling apparel, bags, and accessories she designed. In November of 2021, she was looking online for one of her older designs that was stored on a computer she no longer uses. That’s when she found “this really strange website” in a language that she doesn’t speak, allegedly selling her design.

“I was like, ‘Oh, did I ever send them my work? Like, did I agree to this?’” Dracz recalled in a phone interview with the Daily Dot. She then realized her design was allegedly copied by a brand named Fizello and was being sold on Hepsiburada, an ecommerce company based in Turkey. Dracz was heartbroken.

“I’m making, like, little to no money from my work as a designer. And someone else is profiting off it. Like a big company,” she said.

Kris Protheroe, who runs Hey Hello Candle Co. in Wisconsin, said her designs were copied by another ecommerce giant, Alibaba. She called the experience a “literal nightmare.”

The candle and candle mold designer said she realized she was a victim of alleged design theft after receiving a message from a fellow Etsy user asking her if it was all right that they use her mold, as they allegedly found it being sold on Alibaba. Protheroe felt like it was the beginning of the end of her online candle business.

“In the art community—no matter what you do—if an overseas company, especially stuff like Wish, Alibaba, or SHEIN, once they get your design, it’s like a death kiss,” she said. “Because you can’t do anything.”

Design theft, or what designers feel is the copying of their original designs by larger companies, is nothing new. Many have heard of the allegations of stealing against Urban Outfitters for its jewelry, textile, and home goods designs. Even Gucci has been accused of design theft.

While statistics on just how common design theft is aren’t available, anecdotal evidence suggests it’s an everyday occurrence for many designers. In an email interview with the Daily Dot, luxury fashion designer Hope Macaulay said that “nearly every single one of [her] designs have been copied.” Macaulay most recently posted on Instagram about what she believes to be design theft by NastyGal. When asked how many times her designs have been copied, she said “way too many to count.”

But design theft becomes a whole different minefield when it’s committed by ecommerce giants like SHEIN, Alibaba (and AliExpress), Hepsiburada, Cider, NastyGal, Boohoo, PrettyLittleThing, and the like.

Dids Macdonald, CEO and founder of Anti-Copying In Design (ACID), a U.K.-based organization that campaigns against copyright infringement and design theft, said that design theft happens because “retailers want to take the fast track to market.”

“What these companies do is see what’s trending, see what’s innovative, and then just basically steal it,” Macdonald told the Daily Dot in a Zoom interview. “They’ve got such tight margins that they’re not interested in inventing their own designs.”

“Copying is essential to innovation in fashion,” he told the Daily Dot in a phone interview, in that copying creates and ends trends, which move the fashion industry forward.

“Once the copying proceeds past a certain point, people who want to separate themselves in their fashion choices from others… they move [on] to the thing [of which] copying is just getting started, the new trend that’s happening,” he added.

But, of course, seeing your designs copied doesn’t feel good for most designers.

Macdonald said she founded ACID after experiencing design theft herself in the 1980s in order “to create a plan to help David fight Goliath”—David being independent designers and Goliath being the large retailers that copy their designs. The organization has 850 member companies, many of which represent “several thousands of employees whose livelihood depends on the protection of their IP to achieve growth and protect their jobs.”

Because large companies stonewall and perpetuate litigation that is immensely pricey for independent designers, design theft is already difficult to prosecute when both the accuser and accused are based in the same country, Macdonald said. But global ecommerce retailers complicate the process on multiple levels.

Firstly, designers say they have a very difficult time reporting design theft because of ecommerce websites themselves. Protheroe said she tried to report her situation to Alibaba via the company’s intellectual property infringement page, but after submitting the necessary preliminary information, the subsequent website “immediately” changed from English to another language—even Google Translate wasn’t much help. On top of that, Protheroe said, the page timed out before she could advance in the registration process to report her situation.

“I had to go on [Alibaba’s IP infringement page] on three different computers because it just kept not connecting to the actual site,” Protheroe told the Daily Dot. Once she connected, she said she was asked to verify her email. “By the time I got that email of like, ‘OK, here’s your confirmation code,’ the code had already expired.” Protheroe said she still hasn’t been able to report the infringement to Alibaba.

Michelle Tam, a graphic designer who sells prints and stickers, said her designs were copied by SHEIN—in particular, her “no thank you” plastic bag stickers, which the site sells as part of a 50-piece sticker pack. When she set out to report the copied design, she said she was instructed to simply email “[email protected].” She said she emailed it multiple times and never received a response.

“SHEIN, it’s like a mystery. Like, who runs it? Who do you reach out to about that kind of stuff on their website? They’re like, ‘We take copyrights seriously.’ No, you don’t,” Tam told the Daily Dot in a phone interview. “There’s no actual page or form to fill out.”

Sprigman said designers who create work that is copyrightable, such as a drawing printed onto a surface like some of the items that Tam and Dracz make, might have a difficult time filing a lawsuit against an international company.

“The question is, can you get jurisdiction over them?” he said, meaning whether or not designers based in the U.S. can have legal claims over overseas companies. While universal jurisdiction, or international prosecution of crimes, exists, it is reserved for “grave” crimes against humanity—not design theft and/or potential intellectual property infringement.

And when it comes to actually pressing charges, most designers can’t afford to do so, let alone do so in a foreign court where larger companies might be located. Dracz even thinks that ecommerce sites “count on” designers not having the money to file a suit against corporations. Thus Tam has decided to “cut her losses” and “push” the alleged design theft she’s experienced “out of [her] mind.”

So what can designers do? Tam said using watermarks on her design prevents instances of theft from individuals (not larger companies) who find and copy her work displayed on Redbubble and Etsy. But Protheroe is discouraged by that prospect, citing the ease with which watermarks can be Photoshopped out. Macaulay said that trademarking one’s brand and “finding the correct contact to email so that they remove the listings” is important, too.

“A lot of them will refuse or ignore,” Macaulay told the Daily Dot of brands taking down a listing that a designer believes is design theft. “But in some cases they are forced to listen and take action.”

Sprigman said designs fixed into any tangible medium (like a drawing or graphic) are automatically copyrighted, but if designers register those types of works with the U.S. Copyright Office, they can get “increased damages” if they report copyright infringement.

While the art and printed patterns on clothes are copyrightable, design elements such as the type of fabric used and shape of clothing are not—which means bulk of Macaulay’s designs are not copyrightable. Trademarks, or the symbol or logo that identifies a brand, are “policed very closely,” according to Sprigman.

The biggest resource independent designers have, however, is social media. (Tam, Dracz, Macaulay, and Protheroe all posted about the design theft they said they experienced.)

Macdonald said social media is usually “the only resource” designers have to publicize the situation, but she cautions designers to be careful.

“Our advice is to only say things that are factual,” she said, so designers can avoid being sued for libel, slander, or making any sort of threat to the company that stole their design. “We also mention the retailer’s name. They don’t like it because nobody likes bad publicity.”

All of this says nothing of the emotional toll that design theft can take on independent designers, all of whom handle it in different ways: Protheroe shared that she has no “drive” to create anymore.

“Because every single time I make something, there is that little voice in my head going ‘All right, who’s gonna steal this first? How much money am I going to lose?’” she said. Protheroe has gone so far as to close her online shop, as she feels that listing her designs online only makes them more vulnerable to being copied.

“Instead I want to use all my precious time to focus on running my business as best I can and creating my designs as best I can,” Macaulay said.

The obvious antidote to all of this is to encourage consumers to support local, small, and/or independent businesses and designers. And Macdonald certainly advises that consumers do so.

But what about why these ecommerce brands, such as SHEIN, in particular, are popular in the first place, namely accessible pricing and a wide range of clothing sizes? Macdonald said the solution is “commission, don’t copy.”

“In other words, commission it, pay some sort of royalty to the originator,” Macdonald told the Daily Dot. “Within that business model, there’s still room for the originator to be paid.”

Protheroe said she is a fan of that idea and would even be open to selling the license to her designs to larger companies.

There may be some hope for independent designers who wish to take legal action against larger companies. Congress passed the Copyright Alternative Small Claims Enforcement Act in December 2020, which means the Copyright Claims Board, a new panel of judges, will hear “small copyright claims” under $33,000. The Copyright Office even promised that the board’s proceedings would be “user friendly” to “make it easier for parties to represent themselves.”

Tam urged everyone to be aware of design theft and intellectual property, especially as the internet continues to grow and multiply.

“Everything we see on the internet, someone took the time to create,” Tam said. “If more people just understood that and realized that not everything on the internet is up for grabs, it would just be a better place.”

Alibaba said it is reviewing Protheroe’s allegations but did not provide a comment by publication time. SHEIN, Hepsiburada, and NastyGal did not immediately respond to the Daily Dot’s request for comment.