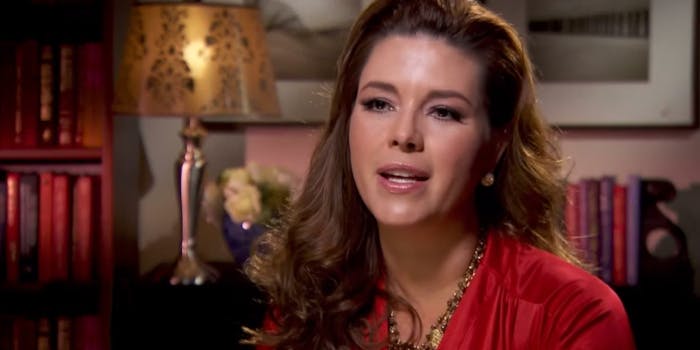 Trump goes on late-night tweetstorm, says to check out Alicia Machado’s ‘sex tape and past’

Donald Trump has been having an especially bad week ever since Hillary Clinton brought up Alicia Machado, the former Miss Universe winner who Trump insulted and publicly humiliated for gaining weight after she won the crown 20 years ago. In the first presidential debate on Monday, Clinton mentioned Machado as an example of Trump’s terrible treatment of women and minorities, then featured in her an ad where Machado detailed how her old boss called her “Miss Piggy” and “Miss Housekeeping.”

Trump not only took Clinton’s bait, but he has doubled-down multiple times since, eventually lashing out by falsely claiming Machado had a sex tape in a tweetstorm early Friday morning.

Trump, who criticized Clinton for sleeping last month, started tweeting around 3:20am Friday and kept going for the next two-plus hours. The tweets were sent from an Android, which people generally accept as Trump himself tweeting instead of his campaign staff. He said he’s not happy about articles citing anonymous sources within the Trump campaign who say the first debate was a disaster.

Anytime you see a story about me or my campaign saying "sources said," DO NOT believe it. There are no sources, they are just made up lies!

Then Trump came after Machado. Since the debate, Trump has continued to justify his fat-shaming of Machado, and has used her to criticize Clinton’s judgment.

Wow, Crooked Hillary was duped and used by my worst Miss U. Hillary floated her as an "angel" without checking her past, which is terrible!

Using Alicia M in the debate as a paragon of virtue just shows that Crooked Hillary suffers from BAD JUDGEMENT! Hillary was set up by a con.

Did Crooked Hillary help disgusting (check out sex tape and past) Alicia M become a U.S. citizen so she could use her in the debate?

Trump floats some of the points that conservatives are using to smear and discredit Machado, while accusing Clinton of helping her become a U.S. citizen (which this person on Twitter thoroughly debunks), but not before telling his followers to check out Machado’s “sex tape and past.”

The so-called “sex tape” in question is from 2005, when Machado was filmed having sex with another cast member on a Spanish reality TV show, for which she later apologized. But Snopes described it as “nothing more than some grainy, night-vision footage of a couple of covered figures writing in a bed” and concluded it’s hardly a sex tape.

The conservatives’ smear campaign against Machado has also included: accusing her of being an accomplice to a 1998 shooting (judges ruled there was insufficient evidence and she was never charged); noting that she has posed nude for Playboy; and claiming that the father of her child is a “notorious Mexican drug kingpin.”

Trump’s tweetstorm was just another version of such unjustified attacks, and it left some people who woke up to it very uneasy.

Good morning. Your Republican nominee has been up all night rage-tweeting. pic.twitter.com/mL1ovBY1bm

A presidential candidate invoked a nonexistent sex tape to try to shame a woman who said the candidate has problems with women. It's 8 am.

We’ve got a long day ahead of us.