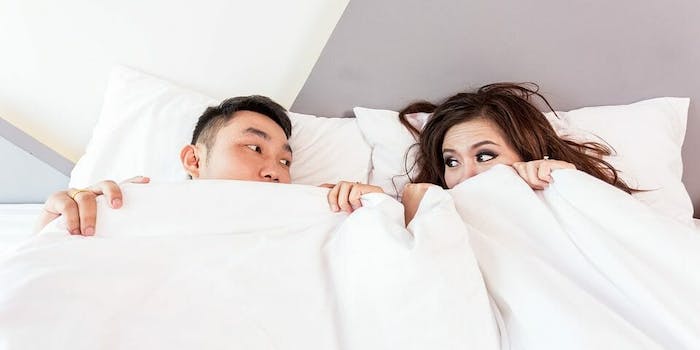 Sex is great for many reasons, surprising healing powers very much included. Whether it’s menstrual cramps, stress, sleeplessness—orgasm can relieve a number of complaints, but among its more valuable uses is as a stand-in for Excedrin.

“What, can sex cure headaches?” you may be muttering to yourself at precisely this moment. The answer, apparently, is yes. Better still, you don’t even need to be within shouting distance of a partner to erotically alleviate a pounding head. This is a job you can tackle all on your own.

According to Dr. Hamid Sami, a neurologist and the director of the Fairfield Headache Center in Connecticut, there are over 100 different types of headaches, some of which activity or exertion could exacerbate. Two common ones, however—tension headaches and the infamously impossible-to-ease migraine—can be banished by sex. Sami told the Daily Dot that relief can last between a few hours and a few days. In part, this has to do with an orgasm’s relaxing properties and homegrown pain relievers: endorphins, oxytocin, and other feel-good hormones.

Indeed, a large-scale 2013 study suggests that sex is particularly useful in treating migraines and cluster headaches. Migraines, for reference, are characterized by excruciating throbbing and sensitivity to light and sound. Nausea is another common side effect, and the whole thing can leave sufferers debilitated for days. Cluster headaches, meanwhile, are cyclical attacks that strike like lightning but with less warning, usually in the vicinity of the eye. These can lead to facial swelling, redness or tearing in the affected eye, and nasal congestion on that side.

How does sex relieve headaches?

Researchers from the University of Muenster in Germany surveyed 800 migraine and 200 cluster headache sufferers about their sexual habits during pain spells. Of the third who reported sexual activity, 60 percent of the migraine camp reported some degree of pain relief associated with sex. Usually, sex obliterated their symptoms entirely. Among participants with cluster headaches, 37 percent said that sex helped somewhat, while 90 percent attested to middling or even total relief. The study authors attributed the sex effect to endorphins, hormones that flood the system during physical activity.

Could sex make a headache worse?

In this study, 50 percent of people with cluster headaches said sex only exacerbated the situation. And according to Wider, sex actually brings on headaches in some people. The Mayo Clinic reports that some sufferers will feel painful pressure build leading up to orgasm, while others experience a sudden onset of cranial pain just before or as they climax.

Coital cephalalgia surfaces in men more often than it does in women, and luckily, it’s usually benign. However, some possible causes include hemorrhage, aneurysm, stroke, or arterial complications. Not eating enough magnesium could contribute to the development of sex headaches, as can low blood pressure and a history of migraines.

“Every person has a different reason why they have a headache, what their triggers are, and what’s going to be a successful treatment for them,” Wider said. “It’s not a one size fits all, and that’s why it’s confusing.” But, she adds, some headache sufferers will definitely derive relief from sexual healing. The best way to know is to just give it a whirl next time a headache strikes.