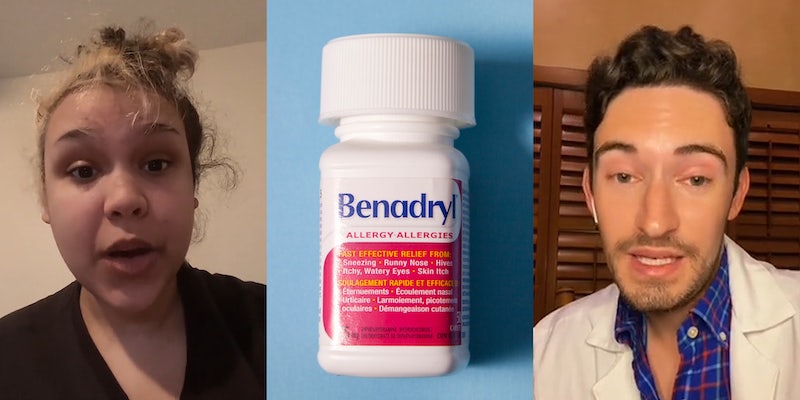 'Medication marketing is crazy! It gets so confusing with all the different brands that are basically the same medication.'

Dr. Ethan Melillo (@millennialrx) doubles as a TikToker who provides clarity and medication hacks for users on the platform. In a recent viral video shared Aug. 5, he came after the widely-used Benadryl.

Melillo stitched another TikToker, Sianna (@damnittodd), who revealed that she believes Benadryl is a scam.

Sianna explains in her video that the name-brand medicine has 25 milligrams of diphenhydramine and any store-brand or generic sleep aid, contains 50 milligrams of the same ingredient.

“This is like my favorite thing to tell people. If you have Benadryl in your house, you could knock yourself out with it,” she says. “If you only have sleep aid and you’re feeling some allergy symptoms, those will probably help if you don’t fall asleep first.”

She suggested to viewers that the next time they go to spend $9 on Zzzquil, they should just go to the allergy section and pick up the same medicine with more tablets for half the price. Her video has over 1.5 million views.

Melillo responded to Sianna’s video with his own stitched video which now has over 4.1 million views and confirmed her theory with head nods as the creator was talking.

In an additional comment made by Melillo in his comments section, he advised to “always look at the back of medication boxes. Don’t be fooled by good marketing.”

In the comments section, some users argued that this was old news while others were shocked.

“Medication marketing is crazy! It gets so confusing with all the different brands that are basically the same medication,” one user said.

“I’m appalled how many people don’t know this,” another commented.

“Baby ol Benny has BEEN my sleep aid! And my nose running a little bit!?? Benny! Tryna go back to sleep too?? TWO BENNYS!!!” a third user said.

In his bio, Melillo made the disclaimer that his account is “medication info, not advice,” as he spent six years in school “learning about drugs so you don’t have to.”