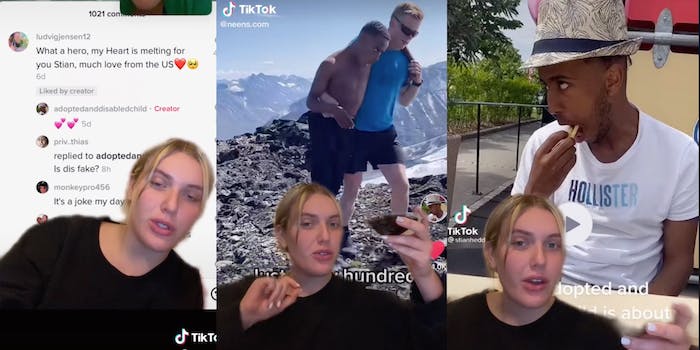 ‘I need to sleuth’: Woman goes viral for allegedly ‘exposing’ TikToker pretending to be disabled for clout

'Miss girl you did it. He deleted his videos.'

A woman has gone viral for allegedly exposing a popular TikTok account that features videos of a TikToker and his friend, who is supposedly disabled.

“They have all these videos on their account of this kid who is adopted and disabled, and I thought it was satire off the bat, so I sent it to all my friends, and they’re like: ‘You know, that’s so sick. Why do you think this is funny? It’s obviously not a joke,'” @neens.com says in the video of the account in question, @adoptedanddisabledchild.

But that didn’t deter @neens.com. “No one was ever thinking this is satire,” @neens.com says. “So I’m like, ‘There’s no way,’ and now I need to sleuth.”

She points to all the comments of support the TikTokers are receiving, and says, “If I was doing something like this as satire, I would make my friends comment something along these lines.”

She then goes to the profile of one of the supportive comments and found, through his tagged Instagram photos, that the supposed random viewer is a friend of the creator.

More “sleuthing” revealed that the “adopted child” is supposedly a member of the Norwegian football team—which the creator and random commenter are also supposedly part of.

“Now, if he was actually disabled, I feel like it would have been hard for him to play in this game two weeks ago for 16 minutes,” @neens.com says, looking at stats available online.

The TikToker comes to the conclusion that the man featured in the videos is not disabled, or adopted.

“So, I’m debunking that the adopted and disabled child is adopted or disabled—this is coming from a girl who has gotten cheated on and can find your family in a matter of three seconds,” @neens.com says

Her video has gone viral, racking up over 1 million likes and 5.5 million views in a matter of days.

She later clarified in the comment section of the video that she does not think making fun of people who are disabled is satire, but that the original videos were so “fake it’s ironically funny they tried to be serious.”

As of Aug. 12, @adoptedanddisabledchild has no videos on its TikTok account. Viewers are crediting the deletion of the videos to @neens.com. The account is still up, however, with 38,600 followers and 1 million likes across its nonexistent videos.

“Miss girl you did it.” one commenter wrote on @neens.com’s video. “he deleted his videos.”

Her video eventually made its way to Reddit, where members of r/TikTokCringe similarly lauded the TikToker’s hunch and sleuthing skills.

The Daily Dot has reached out to both @adoptedanddisabledchild and @neens.com regarding the videos.