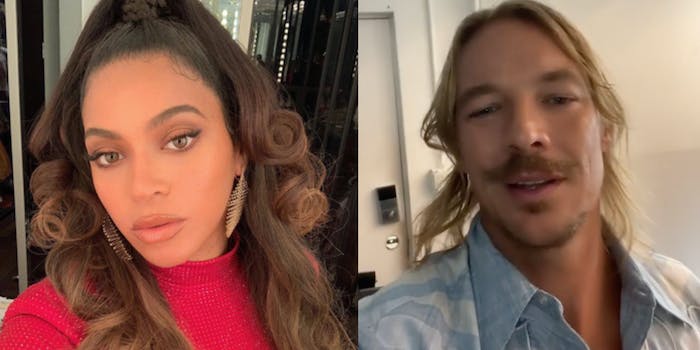 Diplo allegedly claimed he slept with Beyoncé in leaked texts

Music producer Diplo claimed he slept with Beyoncé 10 years ago in alleged texts he sent to another woman in 2010.

According to the messages, the woman—who had sex with Diplo—reached out to him to let him know she contracted a sexually transmitted infection (STI). She asked what kind of infection he had so that she’d know what to treat.

At the time, Diplo denied he had an STI and called the woman a liar. To prove he couldn’t have given her an infection, he invoked Queen Bey.

“Cause I don’t…,” he said in response to the accusation of having an STI. “Also I slept w Beyonce too.”

Screenshots of the exchange were released by Twitter user @ThatsSoShelleyy, who said the woman requested anonymity.

“Exhibit D: (Diplo Gaslighting) A girl reached out to me & would like to remain anon,” she wrote. “Attached is her conversation with Diplo 10 YEARS AGO!!!! @Diplo … you really slept with Beyoncé? Does she know that?”

The Twitter user said the woman was still in fear of Diplo.

After some users said the text exchange may have been from a fake profile, someone recorded a video to show the messages came from Diplo’s verified account.

Several Twitter users are now accusing the music producer of lying about sleeping with Beyoncé. Others are questioning whether his claims are legit considering he helped produce two songs on Beyoncé’s “Lemonade” album.

The messages were released after Diplo was accused of grooming 19-year-old TikTok star Quen Blackwell. Following the accusations, Diplo defended himself onTwitter.

“OK so I rent one of my properties to Quen Blackwell. And yes I use the studio that is in that building,“ he wrote. “Her social media is sarcastic and chaotic and I can see you can get a twisted idea but there is nothing but a friendship between us.”

He continued in another tweet, “As a landlord I don’t really consider age or race as a qualification. U just gotta pay security deposit. And don’t poke holes in the walls or ruin my carpet.”

Diplo has not commented publicly on the Beyoncé rumors.