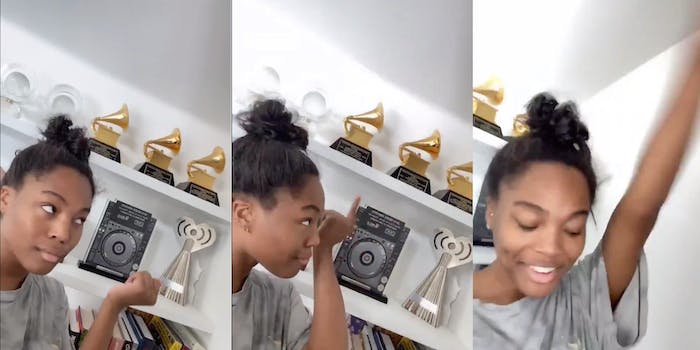 'i’m an adult. i’m not being groomed. platonic relationships exist.'

After 19-year-old TikTok star Quen Blackwell said she moved in, Diplo defended himself online from those who accused him of predatory behavior, saying that their relationship is “nothing but friendship,” the Independent reports.

After Blackwell made a series of TikTok videos documenting her new living situation with Diplo, fans dug up evidence of the 41-year-old music producer’s previous behavior and accused him of grooming Blackwell.

In his defense, Blackwell hosted a live stream and spoke about her experience living with Diplo, and she said he is never home. A fan tweeted that it doesn’t excuse “him dating Azelia Banks with her being 17.”

In a recording of Azealia Banks’ podcast Cheapy’s Two Cents, the rapper did say she had sex with Diplo when she was a 17-year-old.

“Diplo definitely found me on fucking MySpace,” Banks, 29, said. “I always give him credit for launching my career off, but yeah I had to give him some teenage pussy to do it.”

Some tweeted that Diplo’s “predatory behavior” and age make them concerned for Blackwell. According to Stereogum, he also previously said in an apparent, recently dug-up joke that he had “Low key sent my cv for r kelly sex cult membership” in 2017. That tweet was mocked and he deleted it soon after posting.

One fan said that Diplo is “always messing with teenage black girls,” mentioning that he has children with multiple young Black women.

According to Ranker, Diplo has had relationships with Jevon King, Katy Perry, Kate Hudson, M.I.A, and Kathryn Lockhart. And he has children with Lockhart and King.

Blackwell, who did not immediately respond to the Daily Dot’s request for comment, addressed the tweets and comments accusing Diplo of pedophilic behavior by calling Diplo her “LA dad” on social media.

“i’m an adult. i’m not being groomed. platonic relationships exist,” Blackwell tweeted. “diplo and his team have saved me numerous times from the weirdos in LA. my parents trust him. i trust him. y’all are making me feel icky.”

Diplo tweeted late Sunday that there is “nothing but friendship” between the two of them.

He also tweeted that he doesn’t consider “age or race as a qualification” to be a landlord.

An individual replied to Blackwell’s tweet, saying that “black women have came out and said Diplo groomed and fetishized them from a young age.”

“If Diplo truly isn’t doing anything weird with Quen specifically then that’s great,” they tweeted. “But it doesn’t change the fact that Diplo has a long history of predatory behavior.”