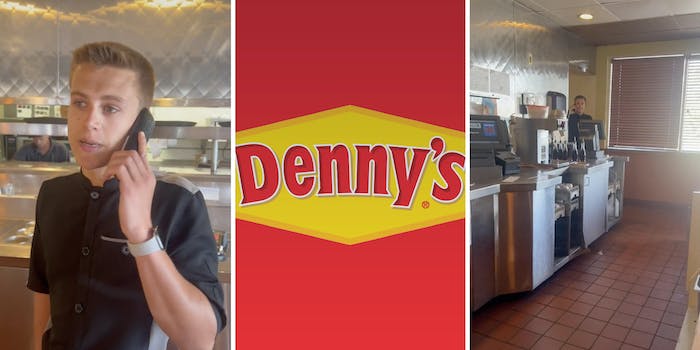 ‘I think you just recorded yourself taking an L from a Denny’s cook’: TikToker films Denny’s worker calling the cops on him—it backfires

In a viral video, a TikToker films a Denny’s worker calling the cops on him after he refused to leave, but it backfired when viewers sided with the Denny’s employees.

“What are you calling the police on me for?” the user, Davey Pricey (@daveypricey), asks.

He records a Denny’s employee on the phone with the police. The worker explains on the phone that workers refused the TikToker service and asked him to leave, and he refused to do so. While recording the worker talking on the phone, the man speaks with the cook.

The cook begins to say that the TikToker was haggling the workers about prices because he couldn’t afford pancakes, but the man cuts him off.

“We just work here, sir, so don’t be mad at us. He’s just doing his job,” the cook responds.

The cook asks him to explain the issue, and he says it was regarding the price of pancakes. The TikToker says he was told by his server that he could get two pancakes for $2, but the workers explain that the price is incorrect.

“I said, ‘I will take four pancakes for $8, but I’m never coming here for pancakes again. Now he’s telling me, ‘I’m refusing you service because you don’t understand my prices,” the TikToker responds.

In the comments, he claimed that his statement was a joke, but it led the worker to refuse him service. “Buddy got pressed when I told him jokingly that I have no problem paying double yesterday’s price for pancakes but that it would be the last time,” he said.

The customer claims that all he did was question the menu. “@Denny’s Diner cocoa beach literally called the police on me for questioning the menu,” he captioned the video.

While the video received over 50,000 views, users in the comments overwhelmingly sided with the Denny’s employees.

“Respect to this team at Dennys! Great job handling a difficult person,” one user said.

Several users noted that prices are fixed at Denny’s, and employees have no way of controlling the prices. They argued that it’s not worth it to argue over the price.

“Dude haggling over the price of pancakes at a Dennys lmao,” one user said.

“Dude..it’s pancakes. Pay the price or get out,” another added.

Others joked about the fact that the TikToker recorded the interaction with the Denny’s employees.

“I think you just recorded yourself taking an L from a Denny’s cook…,” one user said.

“Lol like 95% of the time, the person recording is the ‘Karen,’” another claimed.

The Daily Dot reached out to user Pricey via TikTok comment.