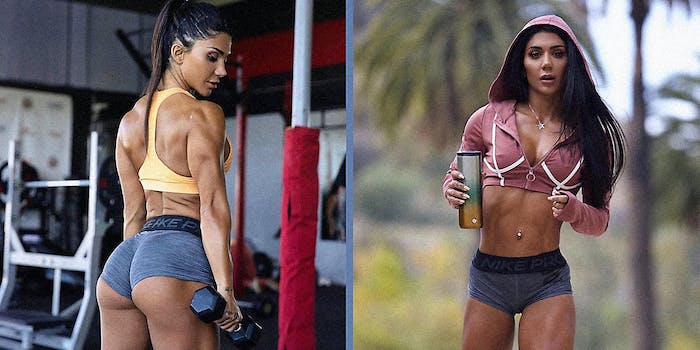 They allegedly told her she was 'naked' and said she would 'offend other families.'

On July 8, fitness influencer and bodybuilder Deniz Saypinar shared with her 1 million followers on Instagram that she was not allowed to board an American Airlines flight from Texas to Miami because of how she was dressed.

According to the Daily Mail, Saypinar, 26, was wearing a brown crop top and cutoff jean shorts.

As reported by the Independent, Saypinar said via an Instagram Story, “They literally didn’t take me to the plane because they say, ‘You’re naked and you offend other families.'”

When asked about the incident involving Saypinar, a spokesperson for American Airlines confirmed to the Daily Dot that the airline “denied boarding for a customer travelling from Dallas-Fort Worth to Miami” but failed to name Saypinar directly. The spokesperson said the customer did not comply with the airline’s conditions of carriage, which state that customers must “dress appropriately.”

The spokesperson affirmed that “offensive clothing isn’t permitted onboard.”

“The customer was advised of our policy and was rebooked on a subsequent flight,” the spokesperson said.

“I never dress in a way that will offend anyone. I’m mature and civilised enough to know what I can and cannot wear,” Saypinar reportedly said in an Instagram Story as she was on the verge of tears.

Saypinar reportedly recently moved to Los Angeles from Turkey to continue her career as a bodybuilder. The New York Post reported that Saypinar said she left Turkey because “they treat woman as a fkn second or third even no class [citizen].” Saypinar was the first woman in Turkey to receive professional status from the International Federation of Bodybuilding and Fitness, according to Dallas Morning News.

“I don’t deserve to be treated like the worst person in the world for wearing denim shorts,” Saypinar reportedly said on Instagram.

“I feel insulted,” she reportedly continued. “‘What separates us from animals if humans can’t control even their most primitive impulses.”

The Daily Dot has reached out to Deniz Saypinar.