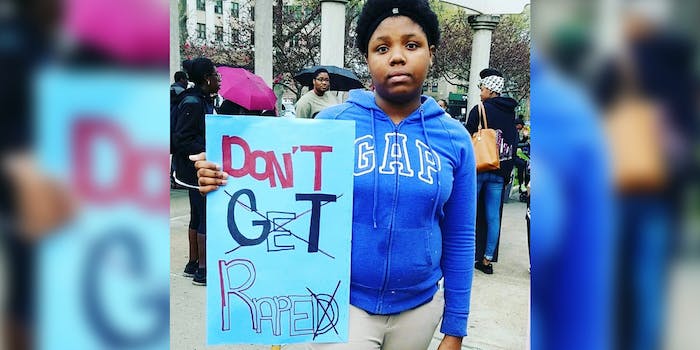 Here's how to show support for sexual assault survivors today—and every day.

A number of factors contribute to the U.S.’s reputation as a cowboy country. Chief among them? Our predilection for blue jeans. But even with denim’s ubiquity, you might notice your subway car or office is awash in Levis today. And there’s a reason for that: Wednesday, April 25, is Denim Day, an international campaign to acknowledge and support survivors of sexual violence.

In the U.S. alone, one out of six women and one in 33 men is the victim of attempted or completed rape, according to the Rape, Abuse & Incest National Network (RAINN). According to 2014 number from the federal Office for Victims of Crime, one in two transgender people will be sexually abused or assaulted in their lifetimes. The National Coalition Against Domestic Violence reports that, nationally, an average of 20 people suffer intimate partner violence each minute.

“Everybody knows somebody who is a survivor,” says Jerin Arifa, founder and president of the National Organization for Women’s (NOW) first virtual chapter, Young Feminists and Allies. “They may not have told us, but the numbers don’t lie.”

Denim Day sends a silent message of solidarity to those survivors. Here’s what it’s all about, and how you can participate.

What is Denim Day?

Every year since 1999, Denim Day has fallen on a Wednesday in April, which also happens to be Sexual Assault Awareness Month. The Los Angeles-based Peace Over Violence, an abuse prevention non-profit, pioneered Denim Day in response to a decision in the Italian Supreme Court that incensed women in the Italian Parliament and worldwide.

An initial conviction on an indecent exposure charge turned into a rape conviction after the young woman appealed, but in November 1998, a Supreme Court justice decided that the victim’s jeans had been too tight to have come off without her help: “Jeans cannot be removed easily and certainly it is impossible to pull them off if the victim is fighting against her attacker with all her force,” went the court ruling. If she played an active role in the removal of her own pants, the judge reasoned, then it could not have been rape.

“It should be noted that it is instinctive, especially for a young woman, to oppose with all her strength the person who wants to rape her,” the ruling continued, according to the Times. “And it is illogical to say that a young woman would passively submit to a rape, which is a grave violence, for fear of undergoing other hypothetical and no more serious offenses to her physical safety.”

Naturally, that line of erroneous reasoning pissed off a lot of people. It is not exactly easy to fight off someone who is physically stronger than you. What’s more, failing to free yourself from an attacker is not the same as “passive submission.”

Misinformed (and often male) lawmakers have historically trotted out the idea of “legitimate” rape, by which they mean forcible rape, as a means of shifting culpability onto survivors for not doing enough to prevent themselves from being attacked. But we know that the body often goes into a sort of temporary paralysis in the face of an assault and that most rapes are not committed by strangers to the victim but by people they know. This adds layers of emotional and psychological distress, making it difficult to remove yourself from the grip of a man holding you down on an abandoned street. At the end of the day, the only person who deserves blame for rape is the rapist.

Because of these reasons, outraged women in the Italian Parliament wore jeans to work after the Supreme Court decision. Their statement spoke loudly enough to be heard in California, where the Senate and Assembly followed suit. Peace Over Violence held its first annual Denim Day in 1999 as a reminder that “there is never an invitation to rape.”

How to participate in Denim Day

Today is the day for your Canadian tuxedo: The easiest way to participate in Denim Day is to wear jeans. Denim Day itself offers a toolkit that shows you how to promote awareness on your social media platforms and engage your community. You can also donate to the campaign—funds go to prevention and support services that include counseling, crisis management, and legal services—or buy some Denim Day merch (which comes in a variety of languages) that more clearly announce the meaning of your denim suit.

Jeans are everywhere all the time, and usually, those jeans are not intended to send any kind of social signal. For those who don’t know about Denim Day, your pants may just read as regular pants without an agenda. That’s not to say you shouldn’t don your denim today. But it’s a good time to take extra steps to augment your support.

What to do beyond Denim Day

“The reason it’s important to have a visible display of solidarity is because of the shame associated [with sexual violence],” Arifa says.

In addition to running NOW’s online chapter, Arifa crafted the City University of New York’s (CUNY’s) sexual assault, sexual harassment, domestic violence, and anti-stalking policy while she was still an undocumented student. Beyond just wearing jeans, she says, there are actionable steps victims’ rights advocates can take to stand up for survivors. Bystander intervention is just one way to prevent assault from happening in the first place.

What is bystander intervention?

“We know that most men are not predators, but most men and women don’t intervene when they witness gender-based violence,” Arifa explains. “Most of us have not had a training on how to do so.”

While there’s evidence to suggest that bystander intervention doesn’t tend to sway would-be perpetrators away from sexual misconduct, it does seem to cut down on the rate of sexual victimization overall by mobilizing the rest of us. Bystander intervention doesn’t have to mean throwing yourself on top of a situation and physically removing the sexual predator. Although, in some cases, it can. You might recall those cycling Swedes who chased Brock Turner off of the woman he was assaulting behind a dumpster.

Bystander intervention can also mean telling someone to shut up when they make a rape joke, or tipping off a bartender when you see something shady happening in the corner booth. “It really depends on how comfortable and safe somebody feels,” Arifa says. “They don’t have to put themselves in danger to stand up for somebody else.”

She recommends familiarizing yourself with the three Ds of bystander intervention: Direct, delegate, and distract. You can directly insert yourself in a questionable situation if you intuit that you can do so safely. You can diffuse a situation by involving outside parties close to the potential victim. And you can also distract a perpetrator with fabricated scenarios. Arifa says she recently approached a stranger on the subway and pretended to recognize her from college. This is just one way to run interception on a man who is behaving inappropriately.

Donate to organizations that help survivors

You can also donate. Domestic violence shelters are perpetually overcrowded; as the Huffington Post’s Melissa Jeltsen reported, 67,646 people secured help from their local domestic violence programs in one day in 2014, but in that same period, 10,871 were turned away due to a lack of resources.

Look up your local DV organizations—or national groups like NCADV, or check out this list from Greatist—to figure out how to send money or, if funds are tight, donate your time to volunteer at a shelter or staff a hotline. Because wearing denim is all well and good, but action is still better.