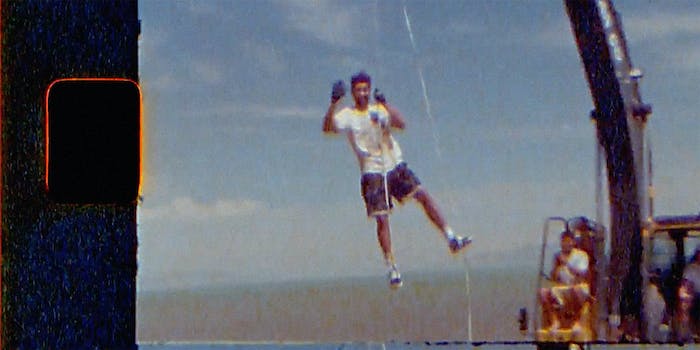 Footage posted by YouTuber Jeff Wittek shows him wakeboarding from an excavator operated by fellow Vlog Squad member David Dobrik. It eventually ends with Wittek dropping into a 1-foot deep lake and grievously injuring his skull.

The video, titled “How I Broke My Face,” was uploaded on Wittek’s YouTube channel on Wednesday and racked up over 1.5 million views in just a day.

The footage begins with Wittek explaining why the Vlog Squad was engaging in such activities in the first place. According to Wittek, once the pandemic hit they were suddenly aware they couldn’t make their usual content anymore. Then, Dobrik sent videos in their group chat to suggest comebacks after the initial lull.

“I didn’t like stunts, it’s always a risk,” Jason Nash, one of the members, says in the video (which primarily includes accounts of four members: Wittek, Dobrik, Nash, and Natalie Mariduena, among others).

While the video shows other members mostly discussing their experiences learning skydiving, Wittek slowly builds the story up to his skull injury.

The skydiving training footage indicates a lack of communication, and Wittek and Mariduena are heard implying that they had their moments of confusion. At one point, Wittek expresses confusion, saying that he had no idea they’d have to do 25 takes to properly learn how to skydive.

In another part, a woman is seen asking him why he’s skydiving.

“Some guy — he’s a weird guy I met him like two years ago,” Wittek says.

“Do you really wanna do this?” she asks.

At one point in the video, Mariduena says they did just 2.5 hours of schooling.

After showcasing the group’s skydiving training, Wittek says he was inspired to do wakeboarding.

“I just jumped out of a plane 20 times,” he says in the video. “What’s the worst that could happen if I swim from a rope over a one foot deep lake?”

“I didn’t know I was gonna go that fast,” he says. “But this is where I made a mistake: I forgot that the biggest fucking idiot I know was driving it.

The video then shows Dobrik managing the excavator as Wittek holds on to the rope, and it moving around in a circle extremely quickly.

At one point, the velocity propels Wittek to fly high before the rope abruptly drops.

Dobrik is heard saying, “oh shit!” as Wittek drops past his window at high speed. He is subsequently seen hitting the water (which is one foot deep) head on, his entire body hanging by a rope around one of his legs.

The exact date of the incident wasn’t immediately clear but Wittek posted a photo on Instagram during the week of June 30, when he said he was injured that week, without clarifying what happened.

On Friday, he uploaded a photo on Instagram telling his followers he would soon be posting a link to details about the accident on his bio, and he advertised the trailer for his “upcoming docu-series on [his] life/accident.”

Since it was released, Wednesday’s video has gone viral and was trending on Twitter by Thursday.

Many expressed their anger toward Dobrik’s callousness, criticizing him for sacrificing safety for content.

“I can’t believe how irresponsible you can be, when you’re willing to risk your “friends” life for content,” one Twitter user wrote.

Another person noted that Dobrik was using only one hand to drive the excavator so that he could record with the other. This observation aligned with other commentary about how Dobrik often prioritizes his content over his friends’ safety.

Others pointed out Dobrik’s history of similar carelessness, something that was shown in the video as well when he was equally negligent with another team member. In the video, before Wittek’s turn, Corinna Kopf was seen wakeboarding.

“The thing comes off and it starts falling down, and Corinna is like, ‘What the fuck, put me down, put me down,’” Wittek says about the incident.

In the video, Kopf is seen panicking while the machine is still on, and screaming, “You take things too far David!”

Others commented on Dobrik’s previous content, showing how the YouTuber once laughed at how he injured a friend in the eye.

Dobrik and the Vlog Squad have recently come under fire because of rape allegations leveled against Vlog Squad member Dominykas Zeglaitis.

The Daily Dot has reached out to Dobrik’s team and will update this report if he responds.