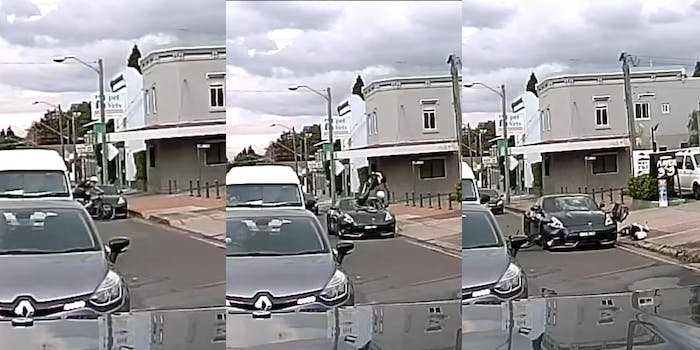 'Another reason why cyclists should be registered and insured!'

Dash camera footage of a crash between a cyclist and a car in Sydney sparked a debate among Facebook commenters who attempted to determine the individual at fault, the Independent reports.

The video, which was posted on Dash Cam Owners Australia’s Facebook page, shows a cyclist waiting to cross a busy street. The individual waits for an opening in the oncoming traffic, and they ride across just before being hit by a black vehicle.

The cyclist is seen tumbling over the vehicle after being hit, and his helmet detaches from his head as he falls onto nearby concrete. The cyclist stands on his feet and stumbles toward the driver to talk. The cyclist falls to the ground, and the driver and passengers in another car run to assist him as the footage concludes.

The cyclist, 15, had non-threatening injuries to his legs and was taken to the hospital, 9News reports. New South Wales Police said that the March 12 incident is unlikely to result in charges because the “cyclist had ridden into the path of the car,” per 9News.

The video has accumulated over 2,500 Facebook reactions and 270 shares. Among the 1,600 comments, people debated who was at fault.

Most commenters appeared to blame the cyclist, saying that they “feel sorry for the car driver.”

“So many cyclists on the road who have no clue of the rules,” one commenter wrote. “Although I am glad the cyclist wasn’t really badly hurt.”

Another said, “You know what the funniest thing about this is…. there is an intersection very close by that would allow a very safe crossing of the road and this would not have happened… Oh well, bloody cyclists they’ll never learn.”

Although many hold the cyclist accountable, other commenters blame the driver. One person, wrote, “It’s not always the cyclists fault.”

“The car driver should always give way to deprestrians and cyclists,” the commenter said. “Even if they unexpectedly come out of nowhere. Even if you don’t have time to stop, you should still give way to them.”

One commenter said that the “driver was going to fast” and another said they “blame the truck’s blind spot.” One individual pointed out the “very unsafe” pedestrian island that they believe played a role in the accident.

“What you can’t see in this footage is that there is a pedestrian island in the middle of the road that is very unsafe,” they wrote. “It’s actually not wide enough for people or bikes to wait safety and has not been upgraded despite many complaints and safety concerns raised about it.”

Others urged the cyclist to obtain biker’s insurance. One person wrote, “Another reason why cyclists should be registered and insured!”

An individual whose comment received numerous laugh reactions wrote that it was the “dash cam car at fault for holding up the traffic an impending the poor cyclist view.”