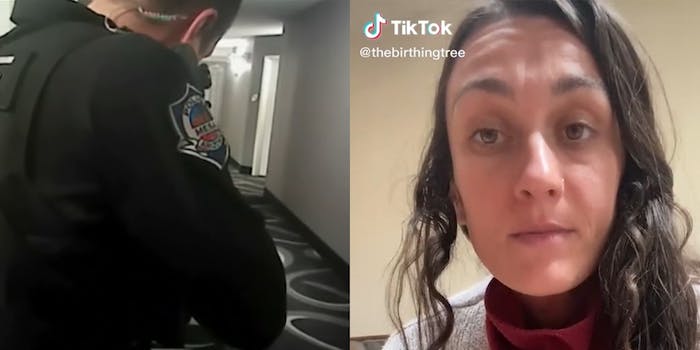 'Can someone please tell me how is it possible... that these police officers keep getting away with murder?'

In a viral TikTok video, the widow of Daniel Shaver calls for police reform as she explains that her family is in dire straits, partly as a result of her husband’s death at the hands of Mesa, Arizona police.

Posted by Laney Sweet (@thebirthingtree) three days ago, the video’s caption reads: “When will #DanielShaver’s story finally be heard? When will cops be held accountable? Why do they get lifetime pensions for killing citizens?”

“Can someone please tell me how is it possible in the United States of America that these police officers keep getting away with murder?” she asks, before providing a rundown of his death.

“He’s collecting a pension for the rest of his life,” she starts. “Meanwhile, my daughters and I are losing our housing… and we don’t have a working vehicle. Tell me how this is justice.”

Police officer Philip Brailsford fatally shot 26-year-old Daniel Shaver, who was begging for his life, in the hallway of a La Quinta Inn & Suites hotel in Mesa, Arizona back in January 2016. Police were responding to a report that Shaver allegedly pointed a rifle out of his hotel room window. 911 was called after two hotel guests had apparently misinterpreted Shaver’s use of the gun, which he was showing to two other parties in his room.

Subsequently, the rifle, which never left the room, was discovered to be a pellet gun used for his pest control business. Shaver exited unarmed with his hands up. Though he was drunk, the Texas native complied with orders, including laying on the ground. Despite his compliance, Brailsford, then 26, shot and killed him with his service weapon, as an emotional Shaver attempted to fix his clothing.

Brailsford was charged with second-degree murder, along with a manslaughter charge; however, he was found not guilty. In March 2018, the public learned that the United States Department of Justice reopened the case and investigated possible civil rights violations by Brailsford.

Brailsford was reinstated to the Mesa Police Department in August 2018 in what AZCentral.com reported as a “procedural” manner, in an “unfunded budge position with no pay or duties.” He was given a retirement on medical grounds with a $2,569.21 monthly tax-free pension for life. His lawyer claimed Brailsford, then 28, had post-traumatic stress disorder resulting from his shooting of Shaver and the subsequent criminal trial.

In a subsequent video, Sweet isn’t buying the idea of Brailsford’s PTSD, for a few reasons. AZCentral.com also found, as she explains, that Brailsford and his wife filed for bankruptcy, which essentially ended whatever claims Shaver’s family had stemming from the lawsuit against Brailsford.

She claims that the city paid for the bankruptcy and that in the filing, “he requested to keep the gun he used to murder [Daniel Shaver].”

“Tell me, if you have PTSD from shooting and killing somebody, do you want to keep that weapon? Do you fight to keep that?”

In a GoFundMe, Sweet said this week that despite her recent viral TikTok videos, her car and housing situation remain up in the air.