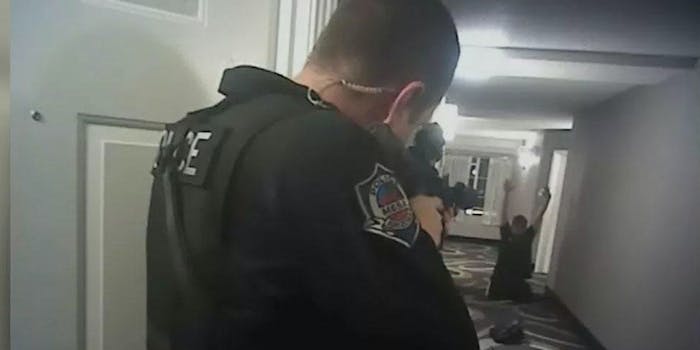 He was fired after the January 2016 murder of Daniel Shaver.

A former cop in Mesa, Arizona, has been receiving more than $2,500 per month for post-traumatic stress disorder almost two years after he was acquitted for shooting an unarmed man who begged for his life in a hotel lobby.

Philip “Mitch” Brailsford was rehired by the City of Mesa so he could receive pension benefits, ABC15 reports, and is thus considered “medically retired” instead of being categorized as “fired.” This allows him certain perks from the city.

Brailsford was initially fired after the January 2016 murder of Daniel Shaver, who was seen on bodycam video crawling on the floor, begging for his life. Officers arrived at a La Quinta hotel after another guest reported seeing Shaver with a gun, according to Reason. Shaver was reportedly using a pellet gun, which officers didn’t seem to know at the time.

Brailsford shot Shaver as the victim was seemingly reaching to fix his pants and killed him after Shaver begged him not to. In 2017, a jury acquitted Brailsford of charges, according to Reason, but he wasn’t allowed back into the police force.

He then appealed the termination later in 2018 and eventually signed a deal with Mesa City Manager’s Office, ABC15 reports. The arrangement allowed him to file for accidental disability pension and medical retirement after he was re-hired. The terms didn’t allow him to be paid or be on duty in the duration of his contract.

Even though City Manager Chris Brady has reportedly said Brailsford was “eligible” to file for this pension, ABC15 investigators found that he had filed more than two years after termination, whereas the rules require a member to file within a year of termination.

“[Brailsford] had a PTSD claim prior to his termination, so in fairness, he was given the opportunity to make that appeal to the board,” Brady said, according to ABC15.

As per the arrangement, Brailsford receives $2,569.21 monthly and will do so for the rest of his life. He will also have a “neutral reference” in case a future employment opportunity arises. The city can spend up to $3 million to help defend him in lawsuits linked to the Shaver case.