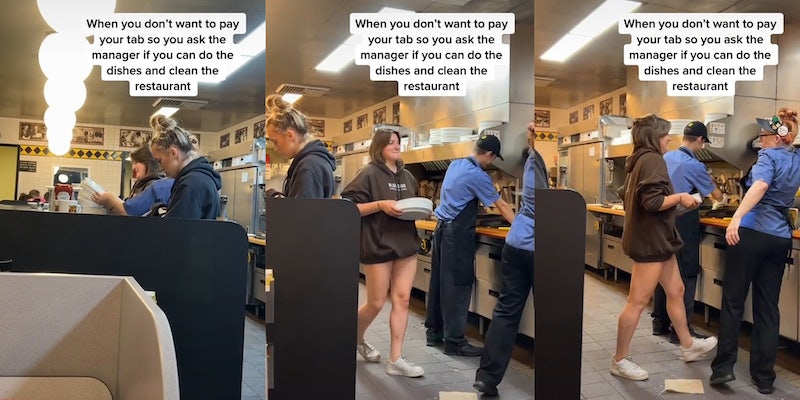 ‘When you don’t want to pay your tab’: Customer starts working at Waffle House so they don’t have to pay bill

'I knew this had to be a Waffle House.'

Everyone’s heard of the line: “If you can’t pay the bill at a restaurant, you wash dishes in the back.” One customer was filmed taking that quite literally.

In what appears to be a common occurrence at Waffle House, a video posted by user @victoriakleim shows a customer working behind the counter along with the text overlay: “When you don’t want to pay your tab so you ask the manager if you can do the dishes and clean the restaurant.”

“I swear, waffle house workers are the most laid back people,” @victoriakleim added in the caption.

The video quickly went viral, accumulating over 1.3 million views in one day.

One commenter was concerned the video didn’t accurately present the situation and that the customer genuinely couldn’t afford to buy their meal. They said: “or they were hungry and offered an exchange.”

Others speculated something like this could only happen at a Waffle House in Missouri. One commenter said, “Only in Missouri tbh,” while another said, “I knew this had to be a waffle house.”

It was later clarified by the original poster of the viral TikTok the customer “asked the manager jokingly if she cleans the kitchen if she’ll pay our tab.” The TikToker also revealed the customers also ended up paying for their food.

“She agreed but we felt bad and ended up paying anyway,” the TikToker continued.

However, it does appear that this video is part of a larger trend with Waffle House, as there are multiple other occasions in which customers were filmed working for the restaurant chain.

The Daily Dot has reached out to @victoriakleim via TikTok comment and Waffle House via press email.