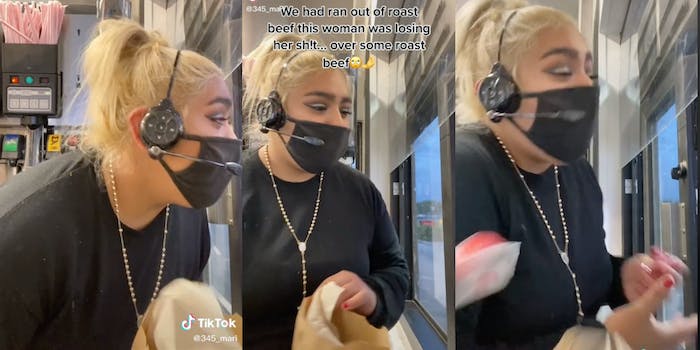 'Fast food is like probably the worst job that anyone can have.'

An Oregon woman was caught on camera throwing food at an Arby’s employee in the drive-thru after being told the roast beef was sold out. The employee said on TikTok that the customer is now facing assault charges.

The worker, under the username @345_mari, filmed the incident and posted it to her TikTok account on May 7, where it’s been viewed 2.4 million times and liked over 400,000 times since.

The worker told the Daily Dot that she posted the video to show viewers that “there are people out there who will get mad over anything” and that fast-food workers are simply “trying our best.”

The confrontation between the worker and the customer, who is out of the frame throughout the video, was already underway when the worker decided to start filming. “I’m glad I decided to film at that moment,” the caption of the video reads.

“Hi ma’am, I’m really sorry about that. Don’t worry about the fry. It’s on us,” the worker tells the customer at the beginning of the clip.

The worker reveals in the text on the video that it was the location’s “first day of reopening” and that it ran out of roast beef after going through the dish quicker than expected. “This woman was losing her sh!t… over some roast beef,” the text reads.

The woman allegedly said to the worker, “You’re Arby’s. How the fuck are you out of roast beef?”

Text on the video notes the worker was trying to remain “friendly” despite how the customer was treating her. “I worked there for quite enough time to know even if I have an attitude with them, it’s not going to make a difference,” the worker told the Daily Dot of her friendly demeanor in the video.

When the worker returns with sauce packets for the woman’s fries in hand, the customer chunks a sauce packet at her before driving away and allegedly shouting, “Fuck you.”

The worker told the Daily Dot that the woman “tried throwing the whole bag” of food at her but that only the sauce packet made it through the drive-thru window.

“She’s no longer allowed at our restaurant anymore—not even allowed to step foot on the property,” the worker says. “That lady tried apologizing to me … before we entered the room, but I didn’t want to speak to her.”

The worker told the Daily Dot that she pressed charges because she wanted the woman to face consequences for her actions.

In her followup video, she thanks commenters for the support they showed her on the previous video. “Fast food is like probably the worst job that anyone can have,” she says. “You just have your days like that, where people test you, and, you know, you just gotta take control of the situation and not flip out on them. It takes a lot of patience to be in fast food because you deal with a lot of stupid people.”

Viewers are lauding the TikToker for “taking her to court.”

“Good for you for taking her to court! Maybe people will stop treating workers like this,” one said.

“YESSS AHHH!!!!! Took her to court YES,” another commented. “I feel so proud for some reason.”

The worker told the Daily Dot this isn’t the first time a customer has thrown things at her or “throw tantrums.”

This isn’t even the first time a customer has gone viral for mistreating a service worker specifically over sold-out food. A woman in March went as far as to seemingly call the police on Taco Bell employees over sold-out Nacho Fries.