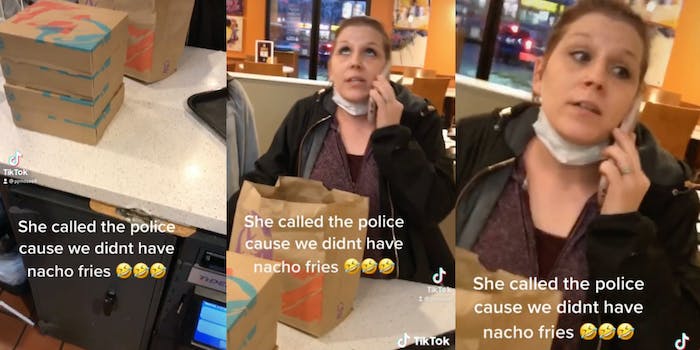 Viewers are expressing sympathy for the woman's daughter, who was present during the altercation.

A video currently going viral on TikTok purports to show an angry woman calling the police on Taco Bell employees after being told that she could not order Nacho Fries.

Posted on Monday by user @pjmossell, the video shows the woman, referred to as a Karen, arguing with the store’s employees while on the phone.

A caption on the video states that the woman called the police after she was informed that Nacho Fries were no longer available.

Although the short clip doesn’t offer much insight into how the incident unfolded, the unidentified woman can be heard referring to the employees as “teenyboppers,” a derogatory term that usually refers to young teenage girls.

The employee filming the encounter can be heard laughing as a female employee off-camera attempts to reason with the woman’s young daughter.

“How old are you?” the female employee asks. “Does she talk to you like that?”

The young girl, who appears motionless and potentially embarrassed by the fiasco, does not respond. Her mother, however, lashes out at the employee for speaking to her daughter.

The video, which has received more than 100,000 likes, has since been flooded with comments condemning the woman and expressing sympathy for her young daughter.

“You can see the emotional damage in that little girl’s face,” @iknowyouarebutwhatameye says. “You can tell it’s not the first time she’s witnessed something like this from her mom.”

But others suggested that the employees acted inappropriately as well by failing to deescalate the situation.

“Poor management,” @reyrey431 argued. “Let her do what she’s gonna do and serve the guests that deserve service. Be bigger than she.”

The Daily Dot reached out to the TikTok user who uploaded the video to inquire further but did not receive a reply by press time.

The footage is yet another example of a Karen acting out in public, an event that has seemingly increased alongside the coronavirus pandemic.