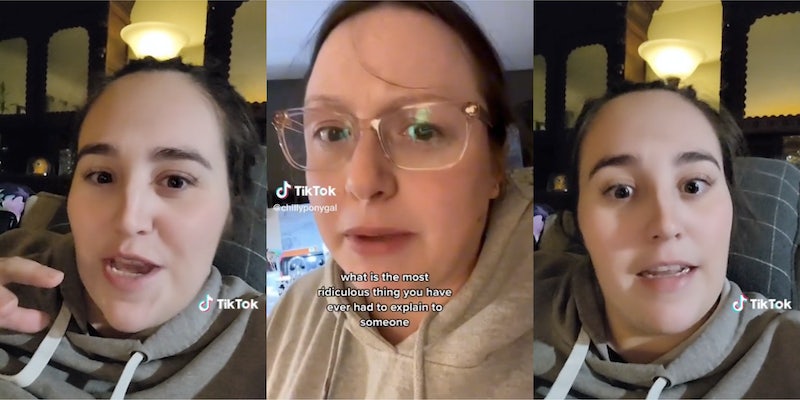 ‘How do you afford 7 new computer in 3 weeks?????’: Customer throws away 7 new computers because she didn’t know how to charge them

'Why wouldn’t you return the computer to the store??'

A woman’s response to a call for ridiculous things that creators on TikTok have had to explain to people has viewers questioning how an adult can go so long without knowing that computers must be charged.

Posted by @rubygirl_22, the video captures her story of a PhD candidate she was assisting over the phone while working in a financial aid office.

“I had a woman transferred to me who was very upset because her refund was late,” @rubygirl_22 says in the video. “We had been on the phone for basically an hour, and she was very upset about this refund being late because she needed to buy a new computer. Totally understand, school is expensive. Because we’re on the phone for over an hour, she’s kind of telling me more things about her life story. She makes a passing comment that this is the seventh computer that she’s gone through, and I’m thinking oh yeah, you’re a PhD student, it’s going to take you a lot of computers to get through your program, or multiple degrees, is what I was thinking. She clarified this was her seventh computer in three weeks.”

@rubygirl_22 says she found out the woman went through that many computers because she simply did not know that they needed to be charged.

“I asked if any charger came out of the box, and she goes, ‘There’s no such thing as a charger,’” she says. “I asked her to go get the box from the computer, and I asked her to look inside of it, and she goes, ‘Oh yeah, I found a cord to something.’ It takes another 15 minutes of convincing her to plug the computer in. When she plugged the computer in, pressed the button, and it turned on, she started screeching in my ear and started yelling at her husband who is sitting next to her. Apparently she threw seven brand new computers out because she didn’t know how to charge them. This person was in a PhD program. Seven brand new computers in the dumpster that she can’t ever get back.”

Viewers were unsurprised that someone had made it so far in the education system without knowing that a computer must be charged in order to continue using it.

“Just because they’re educated, doesn’t mean they’re smart…words from a principal I used to work with,” one commenter wrote.

“This is exactly why I get so mad that some jobs won’t hire people if they don’t have a degree,” another commenter wrote. “A degree doesn’t necessarily mean you’re smart.”

“As someone who also works in higher ed, the things we have to explain to grad student sometimes is concerning,” a commenter wrote.

Others shared their own stories of educated people thinking or believing silly things.

“I once had to show a neurosurgeon how to use an elevator, I was a dishwasher at the same hospital, he had worked there for 5 years,” another commenter wrote.

The Daily Dot reached out to @rubygirl_22 via TikTok comment.