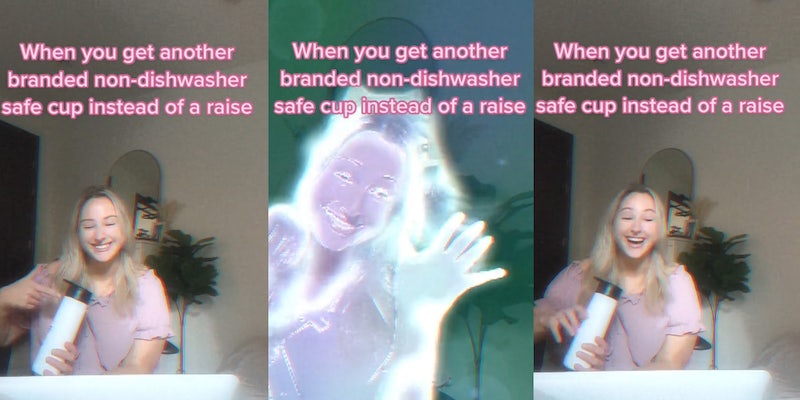 ‘I got a generic PopSockets for my 5-year anniversary’: Worker’s video on getting ‘another branded non-dishwasher safe cup instead of a raise’ sparks debate

'What blessings and magic do you guys get instead of raises?'

With short staffing still present across the nation, employers are doing all that they can to keep employees in the office—sort of.

While employees may ask for perks like the ability to work remotely, more money, or increased vacation time, some employees are finding that what they actually get is worth significantly less.

TikTok user Carly (@callmebyyourcarl) recently went viral after making a joke on the subject. In the video, Carly brandishes a new water bottle.

“When you get another branded non-dishwasher safe cup instead of a raise,” reads the text overlaying the video.

“I am so blessed!” she quipped in the caption before questioning in the comments section: “What blessings and magic do you guys get instead of raises?”

TikTok users shared their answers in the comments.

“A gift card for the company’s uniform store with not enough money to buy anything on it so I have to supplement with MY money,” recalled one user.

“Calendars that are over 75% company partners logos,” added another.

“I got a generic Pop Socket for my 5-year anniversary of subjugation,” remembered a third.

“Probably the worst was a branded maglite knock-off that people discovered was defective and would catch fire when charging,” a fourth shared.

“A cheap step-counter! To remind us that we walk 20,000 steps a day at a job that doesn’t appreciate how much work that signifies,” a further user wrote.

Carly’s branded water bottle seemed to be a common gift and one that came with a host of complaints.

“Bonus points if it won’t fit in any car cup holder,” one wrote of the water bottle.

“Hand wash only? nah, goodwill donation basket it is,” a second stated.

“And everything tastes metallicy out of it,” claimed an additional TikToker.

Some users tried to make Carly feel better about her situation. “Better than a pizza party,” one said.

The Daily Dot reached out to Carly via Instagram direct message.