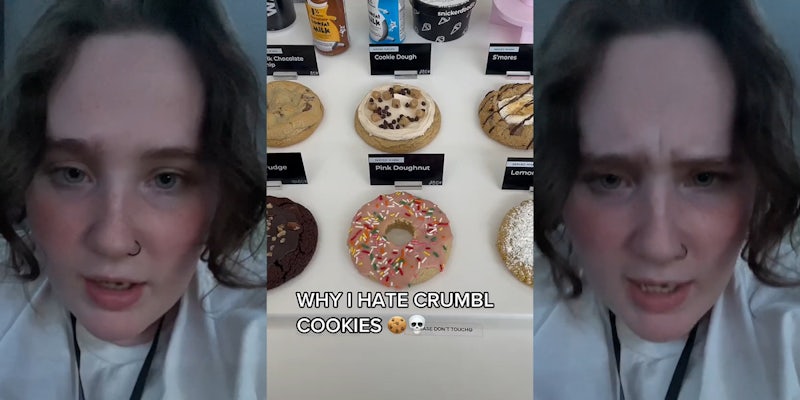 'I have my shift lead telling me that, basically, I'm a horrible person, for literally saying I have to leave.'

With the “Great Resignation” in full swing, many people are quitting their jobs in droves due to less-than-ideal work environments. According to a 2022 FlexJobs survey, 25% of workers left their job due to a “toxic work environment,” while 33% are considering quitting.

TikToker Alyssa (@artist_of_anarchy) reveals in a series of TikTok videos why she quit her job at the cookie chain. Her inital video, which stitched another creator’s video about why they “hate” Crumbl Cookies, has racked up over 630,000 views as of Friday.

@artist_of_anarchy #stitch with @tacobellfan22 I will link part two in the comments sorry, but my story with Crumbl cookie as someone who worked there. #crumblcookies #horrible #dontsupportthem #fyp ♬ Super Freaky Girl – Nicki Minaj

Alyssa explains that she only lasted a week at the job before she quit, claiming that there was essentially no training process.

“Within the first day of my first ever shift with them, not only did nobody know how to train anyone, I was basically told to sit and do nothing,” she says.

That same day, Alyssa claims a lady came in to purchase a cookie and once she was out the door, she discovered a live bug under the frosting when she bit into it.

Her second day on the job wasn’t any better. Despite not receiving any training, Alyssa claims she was forced to make cookies and was ridiculed for not knowing what to do. By the end of the night, the TikToker says her shift lead required her to stay late after her shift, despite only being scheduled for seven hours, from 5 pm to 12:30 am.

An hour after her scheduled clock-out time, Alyssa claims it dawned on her that she wouldn’t be able to leave until around 3 am. Upon this realization, the former Crumbl employee says she told the shift leader that she needed to leave, as her mother was picking her up and she had work in the morning.

In a second video, Alyssa claims that her shift lead then bashed her for needing to leave, ranting to her about her experience working as a minor as well.

“I’m talking to my shift lead and you, know, I’m telling her like, ‘hey I have to get going, you know, my mom has work in the morning in literally a few hours, I need to go,” Alyssa says. “Well, the shift lead starts going off on me basically.”

While her supervisor allegedly argued that Alyssa needed to stay for her “whole shift,” the creator notes that she did work her whole shift. “Mind you, it was 1:30 now. I worked my shift,” she says. “I was scheduled until 12:30. I was not told that I would ever be staying overtime or that this was a common occurrence.”

Alyssa notes that the experience was “overwhelming,” especially considering it was her second day on the job with little to no training. “I have my shift lead telling me that, basically, I’m a horrible person, for literally saying I have to leave and standing there crying,” she says.

“I overall cannot recommend to support that business,” she concludes.

Viewers shared their own experiences working at Crumbl Cookies in the comments of Alyssa’s initial video.

“Same, no training no communication no anything lasted about a month. Easy Job but TERRIBLE COMMUNICATION & MANAGEMENT,” one user shared.

Another former shift lead alleged that she and the crew would be locked in the building until it was 1,000% clean.

“I was forced to ball dough for 8 hours straight with no breaks or food,” a third wrote.