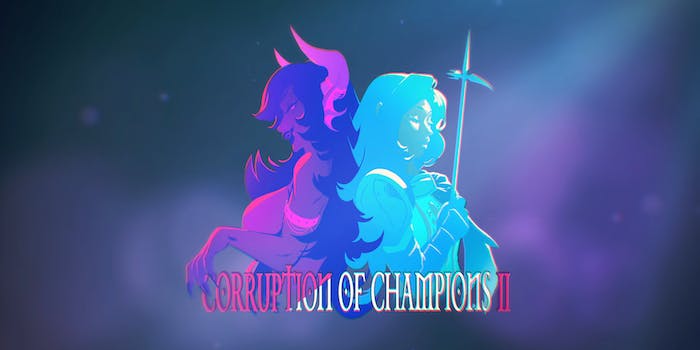 Popular NSFW game Corruption of Champions 2 is heading to Steam

The series is as critically acclaimed as it is controversial.

In a surprising twist for Steam, the sequel to one of the most popular indie adult games on Patreon is headed to Valve’s digital gaming platform. Corruption of Champions 2 was approved for Steam in late July and is set for release on Friday.

Savin, the lead developer behind Corruption of Champions 2, announced the game met Steam’s approval on July 21. The adult adventure is “completely unchanged” for Steam, according to Savin’s blog post, although Valve requested the developer add a bit more clothing to the promotional artwork for the demonic antagonist Kasyrra.

“I know Steam’s been allowing lewd games for a while now but whew boy I’m still in a bit of shock that we’re here now,” Savin wrote in the post.

Corruption of Champions and TiTS are immensely popular with a wide group of players across genders and sexualities, particularly queer cis and trans women. This is partly thanks to both series’ emphasis on monster girls, transformation fetishism, kinky sex scenes, and well-written erotica. Given their gender transformation aspects, both games are well-known for awakening new sexual fetishes in players and speaking to repressed feelings of gender dysphoria, according to fans that spoke with the Daily Dot.

But Fenoxo himself has taken strides in support of trans players: His site’s Discord server bans transphobia, he’s spoken on behalf of trans rights online, and he’s worked to help raise funds for a trans community member’s medical transitioning. Savin has also stood up against transphobia within the gaming community and acknowledged that “shemale” is transphobic when directly referencing trans women. Savin and Fenoxo’s approach to these issues seems tone-deaf, not bigoted. But given the adult games world’s history of exclusionary politics, there’s an argument to be made that cis creators using terms like “shemale” and “trap” in porn enable bigotry within adult communities.

The Daily Dot reached out to Savin and Fenoxo for comment.

Corruption of Champions 2 is available to play for free online. Steam players can purchase the game for $10 in exchange for cloud saves, auto-updates, and Steam achievements in the near future.