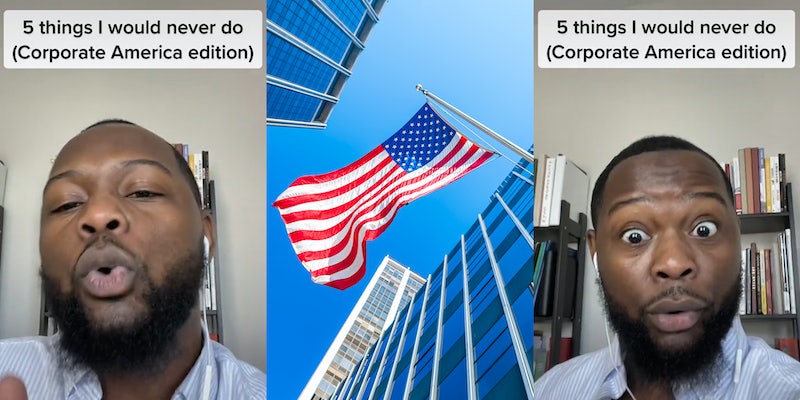 ‘Your one mistake is equivalent to 6 of their mistakes’: Manager shares 5 things to never do if you’re Black in corporate America

'Being Black in corporate has a long list of things not to do.'

Working in corporate America is never easy and getting tips from people who are currently in the workforce is always helpful. It’s exponentially harder for people of color who have to deal with racism, and microaggressions, on top of a lot of other factors. So one Black TikToker decided to list out five things he suggests for Black people to never do in corporate America.

In the video, Jay Maliq, a senior manager, told his viewers that his first tip would be to “never disclose all [your] personal details.” He explains to keep it short and simple.

“I chilled, I read, and I minded my business,” is a response he says he uses whenever a co-worker asks how his weekend was. He says the next tip would be to own your mistakes and correct them immediately.

“Your one mistake is equivalent to six of their mistakes,” he claims.

Tip number three is to “never play the victim” and “stand ten toes down on what [you] said.”

The fourth tip, he suggests, is to keep a paper trail of everything and make sure to always look out for yourself.

“Do you know these people are conspiring against you?” he says. “You didn’t screenshot that?”

In the comments section, people listed off more tips that they found useful.

“These people aren’t your friends,” one person wrote, to which the creator replied, “At all.”

Another person commented, “Listening and watching is the key to self-preservation because people just tell on themselves.”