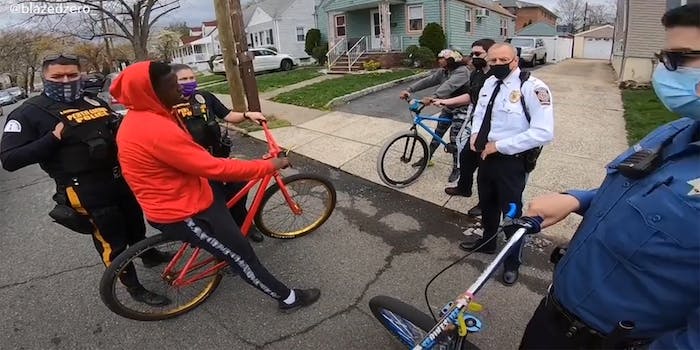 The officers accused the teens of biking without a license.

A viral video shows at least seven cops blocking a suburban street as they confiscate bikes from Black and Latino teens in Perth Amboy, New Jersey.

One Black teen in a red hoodie was trying to talk to the officers while still sitting on his bike. An officer talked over him and insisted he had already been “warned.” After a few seconds, the teen gets off the bike and lets the police take it away.

“Your man over there is out of control a little bit,” one officer says as the teen in a red hoodie was being handcuffed in a nearby driveway.

“Y’all see this, man?” the person filming asks incredulously. “Over some bikes.”

According to NJ.com, the interaction with law enforcement happened after police tailed the cyclists while they were part of a larger group riding down the street. The first officer who stopped them reportedly promised officers wouldn’t take the teens’ bikes and just wanted them off the road.

Footage taken later in the police station shows one officer saying the bikes were confiscated and the teen arrested because officers told the bikers to get on the sidewalk and scolded them for “going against traffic” on their bikes.

“It is for your safety,” the officer says. “You think I want to be here taking bikes away? This is so asinine. Like, we have so much better stuff to do with our time.”

It’s illegal to ride bicycles on the sidewalk in the area where the teens were biking on the street, according to NJ.com.

Still, the department dispatched a throng of officers in several cars to go to a neighborhood, take bikes from teens, and arrest at least one of them over it.

The officer says that if she “wanted to be an asshole,” she wouldn’t give them back their bikes at all and would have the right to do so.

In Perth Amboy, a license tag is required to operate a bicycle and must be renewed with a 50 cent fee every year. Penalties for failing to abide by this ordinance, which was implemented in 1939, include a small fine or up to ten days in jail.

The officer said that if the teens didn’t already have their bikes registered and couldn’t provide receipts proving they owned the bicycles, she wouldn’t have to return them.

“But I’m not going to do this because that’s not the point of this,” she says in the video.

People watching the video at home weren’t exactly sure what the point actually was, however.

The teens reportedly eventually got their bikes back. It wasn’t immediately clear whether charges were filed against the teen who was arrested.